A Good Girl’s Guide to Murder By: Holly Jackson

In Pip’s small town hardly anything noteworthy happens, which is why she’s still hung up on the disappearance and murder case of Andie Bell. Everyone’s ‘knows’ she was killed by her boyfriend Sal Singh and his suicide days later confirmed it, but Pip isn’t so sure and she’s determined to get to the bottom of this mishandled and forgotten case.

Trigger Warning: Drug Use and Dealing, Racism and Suicide. 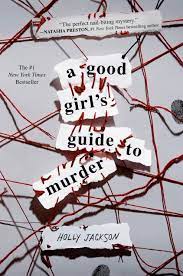 I give this book 1.5 stars (out of five).  First of all, I have to say that this is not a full or official book review because I didn’t read the entire book. Just a bit more than halfway through reading this I wanted to stop because I was frustrated by the slow pacing and the main character’s foolish actions, but instead I just skimmed through the rest of the book. Since I had strong feelings about this book I still wanted to talk about it and this way I didn’t only read the build up and also got to see how it ended. I didn’t fully read it so I can not claim that my opinions apply to 100% of the story.

This story follows Pip she lives in a small town and five years ago there was a big disappearance and murder case. Andie Bell went missing and it was determined that she was killed by her boyfriend Sal Singh and he later committed suicide before he could be arrested. Now for her senior Capstone Project Pip wants to study the investigation and take matters into her own hands, because she has a sneaking suspicion that Sal was innocent and she wants to prove it. Working with Sal’s younger brother Ravi, Pip studies the case and starts conducting interviews to find more evidence. It’s clear from the start that the case was mishandled and there’s a deeper story here. It’s up to them to uncover the secrets and solve the case, even if it puts them at risk.  (I will cover the ending later in more detail).

I was very disappointed when I started reading this book, because of its title and being a best seller I was expecting a fun thrilling story about murder and the following investigation. But I was surprised to find that this story is actually about a girl trying to solve a murder case, the title is a bit misleading because at least for me it made me think that the main character was guiding the readers for crimes rather than solving them.

The main reason why I disliked this book was that the main character Pip is just so stupid and makes so many bad or dangerous decisions but is always protected by plot armour. Not only is it unrealistic and ruins the little amount of realism but it also just leads to Pip being unlikable and annoying at times. I think her being a goody-two-shoes and always focusing on her school work was an important part of her character which partly explains why she was so dedicated to this project but I think this also contributes to the misleading title and premise.

For evidence as to why I think Pip is really stupid this is a direct quote, “When you cach someone lying about a murdered girl, you go ask them why.” (pg. 228-Large Print Edition). This does not seem like a great idea, if someone’s already lied to you and you confront them again they are not only even more likely to lie because they feel pressured or think you’re onto them and feel threatened by you. And this was after Pip already got multiple threats telling her to stop her investigation.

Also instead of just calling the police when she knew who the real killer was, she walked right up to him and confronted him by herself without any help nearby. And not only that but she did it twice and was constantly throwing herself into dangerous positions, even when it really wasn’t necessary. At many points she acted unprofessionally and could’ve compromised her entire investigation by acting impulsively and not having any regard for her personal safety. She also made a lot of logical jumps during her investigation which made reading everything from her perspective really irritating.

[Spoiler Warning, skip the next three paragraphs to avoid them.]

In the end there ended up being two killer, one that killed Sal Singh and made it look like a suicide and one that actually killed Andie. Pip’s best friend’s dad (Mr. Ward) ended up being the one who killed Sal because he was a teacher at their high school and had an inappropriate relationship with Andie Bell. She was with him earlier in the night she disappeared and while they were fighting she accidentally hit her head, he left to get first aid and she had left by the time he got back. When it was local news that Andie went missing Mr. Ward panicked and killed Sal so the investigation would be closed quickly, he also planted evidence on him that made him look very suspicious.

But in reality Andie had gotten home and later gotten into a fight with her younger sister Becca who didn’t do anything to save her when Andie started choking on her own vomit and Becca later dumped her body in a septic tank. Pip went to confront both of these killers first with the police to Mr. Ward; he’d been keeping a young girl who looked kind of like Andie locked up in a house he used to own and was going there often to feed her and make sure she was okay. But when she was saved by the police it was obvious that she was not Andie.

And Pip later went to confront Becca too, except she wasn’t going to turn her in and was just trying to warn her to get out of town. But Becca was one step ahead of her and put some pills in Pip’s tea so Becca would be able to beat her in a physical fight, thankfully Pip’s family and Ravi were able to find her before she was seriously injured. And the very end of this story is Pip giving a speech about her project.

I honestly didn’t like this at all, I’m pretty sure there’s a sequel but I’m probably not going to read it. There were so many cliches and heavily used tropes that not much of this story was interesting or its own thing. For example, the romance between Pip and Ravi was unique at all as well as Pip finally getting into her dream school at the end. Lots of the clues and aspects of the main storyline weren’t well done or original either and I think that’s a main reason why I didn’t even want to finish this even after reading the majority of it already.

I think I have to mention that Sal Singh the character that was originally believed to be the killer was a person of colour, this contributed to the police’s eagerness to come to the conclusion of blaming him without extensive evidence and how the story was covered in the media. With racist reporters and journalists out right calling him a murder before he was even confirmed to be the actual killer by police. Looking at this aspect of the story makes it feel more real as this is something that does occur often in the real world, especially in countries like the United States where this takes place.

One thing I did like was the twist of one of the killers being a character close to Pip and that there were two killers instead of one like most people believed. Besides this one reveal I don’t think there’s much that makes up for everything wrong with this book, but if you made it to the end then at least you get a good twist. I’m honestly surprised this book is popular because to me it wasn’t even average and I disliked it.