All of This is True By: Lygia Day Peñaflor

Everything seems great at first when Miri, Penny, Jonah and Soleil meet and become friends with their favourite author, Fatima Ro. But things change quickly when Fatima publishes a book with all their deepest secrets on display. 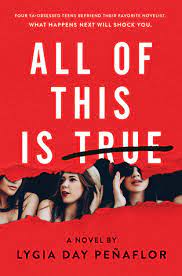 I give this book 2.5 stars (out of five). I didn’t like this book that much, mainly because of the formatting and the lack of satisfaction in the story. There’s no clear resolution and it covers so many issues but doesn’t fully explore any of them in a way that feels complete.

This is the story of four teenage high school students who became friends with their favourite author Fatima Ro and then she wrote a book about them and published all their secrets. She didn’t change the story enough so everyone who knew them could recognize their characters.

The thing that gives this story a meaningful plot is that one of the characters Jonah is new in town and has a Mysterious Past™, for a while his girlfriend Soleil and Fatima Ro (think he is a sexual assault victim from a case at his old school.

[Spoiler Warning, skip the rest of this review to avoid them.]

But it’s later revealed that he was actually one of the assalents involved in the incident and not the victim, as they had believed. This revelation leads to Fatima cutting all the kids out of life and after her book was released Jonah was found and attacked because people realized who he was.

This story is told through the point of view of multiple different interviews, articles and excerpts from the fictional book The Absolution of Brady Stevenson. This gives the reader insight into each character’s perspective on how things happened, with hindsight and in journal entries from the time so you could see how everything played out.

I have many opinions about this book.

First of all, I hate the formatting and the way the entire story is told. While providing many different points of view from different times it was also very confusing as the character’s perspective we’re reading changes very quickly and you have to keep up with what’s happening in the real world and in the ‘fictional’ story. Ultimately I found it ineffective and that’s the main reason why this got such a low rating, because it was just really annoying to read with the perspective constantly changing, I wouldn’t have minded as much if the changes were less frequent but it’s just disorientating to read, especially all at once like I did.

The kids (besides Jonah) are not at fault at all, they were in an unhealthy situation and Fatima as the adult should’ve recognized that she was in a position of power over those kids. She let them form an unhealthy relationship with her and then exploited and manipulated them into doing what she thought would become a good plot. Then when the final twist came, she turned on them. Even if Fatmia was emotional or hurt by what happened as well as the other characters, again as the adult she had the responsibility to be there for the kids she let form emotional attachments with her, and she did nothing to help them and actively hurt them in the aftermath.

I’m pretty sure what Fatima Ro did in this story is illegal and I think the kids definitely have grounds to take legal action against her, because she didn’t change anything enough and everyone in their town would’ve known who the characters are. Especially since Jonah was made braindead by an assault directly caused by her novel.

I think it’s important to note that just because Fatima Ro changed the ending in her fictional retelling of the events does not make up for how she acted in reality, and even if she had permission from Jonah to retell his story and to redeem him within it, she did not have permission or consent from anyone else involved. The story isn’t ethical, more so because the book includes many intimate details of the character’s lives.

The whole idea of writing a retelling of real life events to go back and fix your mistakes is good when it can be therapeutic and help you process your grief like it did in Fatima’s first book. But it isn’t healthy when all the main characters are alive and directly implied under the guise of fiction, it doesn’t change anything in reality, the people involved are still emotionally hurt, traumatized, betrayed or literally brain dead because of her actions, and you could argue that publishing the book itself was another mistake that she can’t change.

There’s no argument there for her writing as a way to process and fix what happened, because her doing that still doesn’t change anything in the real world and she still hadn’t talked to any of the real people involved despite writing out a different ending. You can’t act like that’s the ending you want while also actively not reaching out to fix things with the real people that you hurt.

It’s also very clear both in the fictional book and in reality that the author is in the wrong for associating herself with high schoolers and exploiting them to her own benefit. She took advantage of young people, pushed them into relationships and sexual activity, manipulated them into buying and doing things for her and tore their friend group apart. Then she just left, ghosted them all and later published all their secrets. It’s obvious that Fatima is not only wrong but guilty of taking advantage of her young fans.

I liked the twist of everyone assuming Jonah was a victim before Penny found out the truth. I actually was confused when he was seen as the victim because it was definitely foreshadowed before that he wasn’t and I was even initially disappointed that he wasn’t going to be one of the abusers because I thought that would’ve been more interesting.

The fact that they did have some very sexual scenes between Jonah and Soleil even though it’s later revealed that he is a past assaulter is pretty out there. I feel really bad for Soleil because she was trying her best to be there for Jonah, support him through his recovery and help him be a survivor. He didn’t tell her the truth for so long and he just let her be with him in both a romantic and sexual context, which is unacceptable. If he wanted to do anything sexual with her, he should’ve told her first.

Also the characters started a mini religion out of the Art of Human Connection because of Fatima Ro but they later found out the messages were based on a segment from some random Magazine on how to flirt. That was shocking but not surprising, of course she would plagiarize and have an army of teenagers following her before anyone found out.

This only makes sense if you’ve read the book, but I don’t like Miri because she wouldn’t stop defending Fatima even when she was proven to be a terrible person in the eyes of the general public. Sometimes it’s hard for people to realize they’ve been manipulated but I think Miri understood what was happening but she thought because Fatima ‘fixed’ it in her book that it was okay. But that still isn’t okay and Miri isn’t the one who gets to decide that, which is why it’s even more annoying that she keeps arguing with Penny and Soleil.

Overall I think this book had a good premise and surprising twists but it just fell flat when it came to the delivery.