All These Things I’ve Done By: Gabrielle Zevin (Birthright trilogy #1)

In the year 2083 Anya Balanchine’s life is pretty normal, she goes to school, takes care of her siblings and sick grandmother and tries to avoid falling in love with the new D.A’s son, Win. But Anya is also the young daughter of a notorious and now dead mafia boss.

So when Anya’s ex-boyfriend is poisoned by a chocolate bar that her family illegally produces and sells, people thinks she’s the one to blame. This gives her plenty of unwanted attention from everyone, including her mafia family. 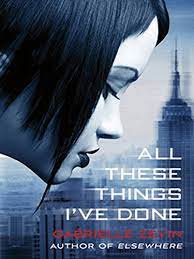 I give this book four stars (out of five). I think it was well written and really interesting. All the characters are believable, relatable and easy to understand. The story takes place relatively far in the future in the year 2083, in New York City. I think this book is almost like a statement of what the world could be like just a few decades into the future, where water supplies are low, chocolate is contraband and caffeine is illegal. As well as many other things being worse like a typical dystopian future without a natural disaster or apocalypse of some kind, and with more of a focus on mafia relations.

I loved the main character, Anya Balanchine even though I don’t agree with some of the things she says and the decisions she makes. But even if her decisions aren’t always the best ones she could make, they’re what makes sense for Anya’s character to do. I also really liked how the author describes things and tells them from Anya’s perspective.

For this series I’m not going to be giving plot summaries, mainly because they’d be very long and it would be hard to give an accurate overview without spoiling many plot points. (This is similar to synopsis at the top left) Anya Balanchine is the sixteen year old daughter of an infamous and now dead mafia boss. Her life is fairly routine, going to school, taking care of her siblings and sick grandmother and trying to avoid falling in love with the new D.A’s son, Win. But when Anya’s ex-boyfriend is poisoned by one of the chocolate bars her family illegally produces and sells, people think she’s the one to blame. This gives her plenty of unwanted attention from everyone, including her mafia family who eventually become a lot more interested in her potential than before.

However, this book really made me question what the next and future generations will live like and how we can prevent the world from changing, so that the world of this story doesn’t come true. Overall I really enjoyed reading this book and I think it’s a great story.