Always & Forever, Lara Jean By: Jenny Han (To all the Boys I’ve Loved Before #3)

In this interesting conclusion to the To All the Boys I’ve Loved series Lara Jean and Peter’s relationship is put through yet another series of challenges.

When Lara Jean isn’t accepted to the nearby university and has to go to a school farther away, their relationship is strained even more. But will they be able to pull through and overcome the difficulties of a long distance relationship? 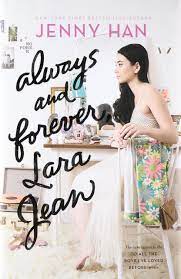 I give this book two stars (out of five) because after reading the first two books I thought the last one would be a better conclusion to the series overall, but I was still disappointed. The main reason I didn’t like this book was because it only focused on Lara Jean and Peter’s relationship and everything else that happened either felt like it was only there for filler or to create some new conflict between them. I also didn’t like that the majority of the plot was predictable and not very meaningful and I don’t like the ending at all.

The main plot is that Lara Jean ends up not getting accepted to the university that everyone wanted and expected her to, so she is going to a different place than Peter and she has to decide where. Throughout the rest of the story lots of things happen like meeting Margot’s boyfriend or Lara Jean’s dad getting married but there’s also more and more conflict between Lara Jean and Peter.

I didn’t like the ending because I was expecting a big climax or something meaningful to happen but it just ended on a normal date and we, as readers, don’t even get to see them start university, which was what the entire book was about. Overall it was just very anticlimactic and predictable, from very early on in the book you can predict major events. I didn’t like how there was often brief conflict between the love interests only for it to either be resolved quickly or ultimately be meaningless in the end. To the point where I kind of felt like the hours it took to read this were kind of a waste of time. However, I did like the continued close relationship between the sisters, the wedding scene and preparation and other background characters and events.

My main problem with it was that a lot of the book just felt like filler and there were only a few scenes that were actually very meaningful or important to the plot. Overall, I would not recommend this book, even compared to the first two books in this series I think this is definitely the worst.