Anatomy of a Murderer By: Tim Floreen

This unbelievably odd story explores the philosophy and science behind murder and how someone can be changed in the future. Not through rehabilitation or healthcare, but through an experimental brain chip. 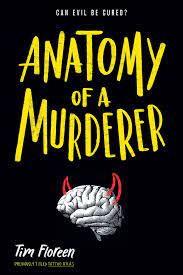 I give this book 1 star (out of five). This is probably the most confusing and weird book I’ve ever read. If I hadn’t already read this and someone tried to describe the plot to me I’d honestly think that they were making it up, I did read this book and I still don’t even know what I read.

The main characters and romance are gay, which is good for representation I guess but also … the main character Rem has a murder boyfriend and I don’t know if the popular phrase, “Be gay do crime,” can justify this one.

Being 100% serious and transparent this seems like possibly the weirdest thing I’ve ever read and I will admit to having read a lot of fanfiction in addition to many other books, so that’s kind of saying a lot.

I don’t even know how to begin explaining the plot. In summary, a few years ago one of Rem’s (short for Jeremy) best friends is killed in a school shooting and the shooter is stopped before he can finish what he was planning to do. It was obvious that the shooter Franklin was targeting Rem and his friends specifically because they’d each done something to humiliate him and push him to violence. Years later Franklin gets an experimental scientific chip implanted in his brain and because Rem’s Mom is an expert scientist leading the project, he ends up involved too.

But Franklin is too smart for them and manages to hack the system and escape unnoticed, the first thing he did was visit Rem because he has a crush on him. Rem promises not to report him but then more and more of his best friends start dying.

[Spoiler Warning, skip the next paragraph to avoid them.]

Rem falls in love with the killer and the ending is so weird it’s hard to explain. Simply put, because of the function in the brain chip he was frequently switching between his unaltered self and a version of him who was made to be more empathic. This version is who Rem got close with and the other was who committed all the crimes, the ending has the clear theme of whether or not he’s responsible and where the lines between good and bad are. But after trying to kill Rem and another of his close friends down Rem is able to switch Franklin back and upon understanding what happened, Franklin takes his own life to make it simpler for them both going forward and Rem kisses Franklin while he dies. As I said before, it is very weird.

Video games causing violence was another main theme and I didn’t want to talk about it too much because it’s a noticeably less weird topic than everything else even if I don’t agree with it. The narrative that violent video games are ruining children is kind of old and annoying to teens nowadays, but I don’t think it’s too out of place here with the other themes of the story.

The only actually interesting part of this book was the Tattoo Atlas that Rem had and drew in throughout the story he was an artist and what he drew often had deeper meanings or messages in relation to the story. But the single aspect of artistic coolness in this notebook was greatly outshined by the absolute chaos that was the main storyline.

I honestly still don’t understand how this got published, I’m still confused about that and am probably going to be for a while. If you couldn’t tell from the rest of this review, I would recommend reading basically anything else before I could even consider recommending this.

Note: Before publishing this review I wanted to look at a few other people’s opinions and apparently lots of people including well known authors really liked this book, which is very confusing to me because it’s without any doubt some of the most confusing and illogical writing I have ever encountered.