This is a classic, the well known story of the Manor Farm where the animals rebelled against the humans and became the first animal-run farm, Animal Farm. But even without humans around their influence just can’t be escaped, will the animals ever escape oppression?

[Spoiler… the answer is no.] 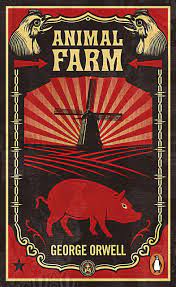 I give this book 3.5 stars (out of five). This is an allegory for the russian revolution, this was also published in 1945 so this is my 2021 perspective on it. I personally read this book during a novel study for school, so my experience might be a bit different than if I had just read it on my own. I did assignments and discussions on it and also learned history about the same topic, so all of those things will influence my perception and experience.

This story follows a farm’s worth of animals in England, after a speech from the oldest and wisest pig on the farm Old Major they are inspired for a rebellion against the humans who run the farm. They are treated very badly and they decide to fight for their rights under what they call Animalism. Eventually they are able to overpower the humans and it becomes Animal Farm, the first farm run by animals only without humans. But soon after the rebellion the Pigs (who are the smartest animals on the farm) take over and exercise control over all the other animals.

At first there are two opposing sides, Napoleon and Snowball, who completely disagree about what to do next. Snowball is later run off the farm and Napoleon takes over as the sole leader of the farm, he is essentially a dictator and the farm is shifted entirely to accommodate the Pigs at the expense of all the other animals. Years pass and things change but they aren’t getting better and Napoleon is still a terrible leader. By the end of the story all the fundamental commandments of Animalism have been broken by the pigs and the other animals start to see how similar they are to the oppressive humans who used to control them.

Something that surprised me about this book was actually its length, it only has ten chapters and is a really short read for something that is widely considered a classic. I liked the concept of Animalism, and how it was portrayed throughout the story. It was easy to see how the basic fundamental ideas were lost very quickly after the rebellion and were later thrown out all together. I’m pretty sure every one of the 7 commandments were broken at some point.

I noticed especially since I was studying it was all the symbolism within the story, all the characters who aren’t pigs represent the working class and those who were oppressed during the russian revolution by the new people in power. Boxer specifically, the horse, is the embodiment of workers during this time. He works so hard for so long that he dies because of it. And the Pigs and Napoleon considered him both an asset and a threat, so when he got too weak they were quick to get rid of him, despite the amount of work he would have continued to do on the farm if he was properly treated.

The thing that stood out to me the most was the ending, there was no groundbreaking moment or some big event. It was simply the other animals realizing that the Pigs have become indistinguishable from the men they fought to be free of. This is an incredibly eye-opening moment for them and comes across as an important step into understanding what’s happening, even for the reader. I think it was both a really good ending and also a really sad ending, the animals can finally see what they Pigs are doing and have become but it doesn’t necessarily lead them any closer to breaking free of the restrictive life they face and it doesn’t take them anywhere towards change, besides giving them a bit more information. At the end of the story, the Pigs still have all the power over the other animals and even life on the other surrounding farms will get worse too.

If I wasn’t reading this in a class lots of the historical symbolism would have definitely been lost on me, I’m still in school and generally don’t know a ton about history so this might be different for every reader. But I think if you’re going to read this you should also read up on the russian revolution and other events happening at the time.

Ultimately I think this was a very good allegory, although this is still sort of my introduction to the concept. The animals rebelling and overtaking the human owners, and then running their own farm can be seen as a direct parallel to many revolutions. But how the pigs rose up and quickly took control and then proceeded to be just the same as the humans or worse, can really show what power does to people. Even those who were once oppressed will oppress others when they are given the chance to hold the power and benefit from a corrupt system.