This is the story of how the students of Alexandria Prep are exposed. When a school app gets hacked and all the information on student’s phones are gradually leaked, exposing many scandalous secrets. Who’s secrets will be spilled next? And who is behind the information constantly being leaking? Read to find out. 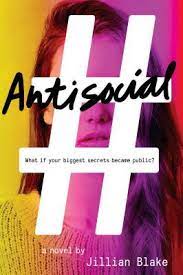 I give this book 4 stars (out of five). Just letting you know, this book is a trip, it is an emotional rollercoaster and a very dramatic story. The main character, Anna Soler is a high school senior starting her second semester at Alexandria Prep. The main drama at least at the beginning of the book is Anna trying to make up with her old friend group and best friends, who she abandoned months ago when she got a new popular basketball star boyfriend, named Palmer.
But when they break up right before Christmas and she’s left with no friends and no one to go to when school starts again she’s kind of astray. On the first day of school one of her old friends invites her back over to their table, but it’s clear she is not forgiven and her ex two best friends walk away from her. She’s trying to earn back their trust.

The real tea plot starts when the first leak happens, basically every student has this one app downloaded to keep track of their school schedule and events. But something went wrong with the software and it ended up keeping and saving all the data off of the student’s phones, and being a prep school there are many people capable of hacking into that program. At first it’s minimal, the first leak is just a simple leak of anonymous searches made while using school wifi, of course this is embarrassing but nothing too major. But then it escalates quickly, the next leak was major and extremely public.

At one of the basketball games a slide show starts randomly playing on the big screen, with speakers blasting music to go with it. Wallace, one of Prep’s best players and most popular student’s phone was completely hacked. Photos and videos of him and his friends are shown at first. Then screenshots exposing him, for a few major things like how they haze the new basketball players, having a sexual relationship with a teacher and the fact that even though he doesn’t need it in any way, shape or form he’s on a full scholarship based on ‘financial hardship’. At the end of it all there’s a link (shown to everyone) to a website with literally everything off his phone on it, and of course every student is going to be looking through all of it (another big thing relieved in that is that him and some of the other players might be ‘juicing; or using some type of steroids).

The next day at school there’s an ‘emergency assembly’ and during the assembly more and more students’ phones are hacked and their secrets spilled, their entire lives are shown and all their information posted to that website. More and more people are exposed including someone who’s a kleptomaniac, someone with herpes, someone who cheated on three AP exams last year, someone who had to hide a pregnancy and abortion and one senior boy who has dozens of girls pictures (nudes) from the school and ranks them in the form of a deck of cards.

[Major Spoilers ahead, to avoid further spoilers skip to the last paragraph]

Now here’s Anna’s place in all of this, Palmer her ex boyfriend is one of the players accused of using steroids, one of her newly regained best friends was placed in the lowest possible place in the deck of cards (with a pic he took of her when she was asleep). And one of her other close friends, Haven, is a major hacker who has done slightly similar things in the past and everyone thinks he did this. But here’s the thing; he didn’t do it or have any to do with it but he can’t prove that. However, his Dad claims that he can. And Anna and her other close friend Rad sneak into a parents only meeting to figure out what he’s doing, unfortunately his way to prove Haven’s innocence was to blame it all on their other friend Jethro, who’s also a hacker. This causes Jethro (who Anna also has feelings for) to literally have to go into hiding, since he’s not a rich kid like most of the other students at Prep. Before Haven’s name was cleared his house was raided by a swat team because someone accused him of being a potential school shooter.

I can’t go any further in a summary without covering everything and potentially ruining the book for you. But I really have to say that I absolutely love the ending, I think although it’s kind of sad it also works so well and really is a great end to the story. I also think it really makes a good commentary on teenagers and how we live our lives online, how much we share and say, how open we are online and what that says about us. Overall I really like this book and I think you will to, if you’re a teenager for sure, other age groups may also enjoy this book so go check it out however old you are (unless you’re a younger reader because this book includes sex, drugs, alcohol, etc).