Thora/Theo is the Ash princess because her country Astrea has been conquered by the Kalovaxians. She was kept alive as a trophy and used as a symbol of weakness, punished whenever there were revolts. She just tried to stay alive, but when the rebellion is the closest it’s ever been she finally has a chance to do something to help Astrea and all the people she could never save. But Theo must make dangerous and risky choices if she’s willing to risk it all to take back Astrea. 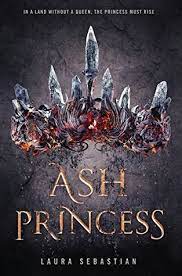 I give this book 4.5 stars (out of five). I loved the fantasy setting, world building, concept and main character. Overall I think this is a very well written good story and I immediately went out to find the sequel, Lady Smoke, once I finished reading this. One of my favourite things were the little details and the relationships between characters and how they were used to make the story come to life and feel more complete.

The following is a very simplified plot summary, for more details look at the fan wiki page.

This story follows Thora/Theo, she is the Ash princess because her country has been conquered by the Kalovaxians and she was kept alive as a trophy. Whenever the remaining Astreans tried to revolt or rebel she would be punished. She lived most of her life at the palace just trying to stay alive and avoid worsening her situation, but then she eventually gets an opportunity to escape with the aid of a few surviving Astrean rebels including some people she used to know.

[Spoiler warning, skip to the last three paragraphs to avoid them.]

But instead of taking up the chance she chooses to stay at the palace and try to hatch a plan for a possible rebellion. The chances are extremely slim and everything is stacked against them but Theo has to try because it’s the only thing she can do, once she finds out what has really happened to her people outside the palace. Theo’s plan is to get the prince S∅ren to fall in love with her and then turn him against his Father the terrible leader The Kaiser. This will split the court since some will support S∅ren and others won’t.

Then she would kill him and make it look like The Kaiser did, potentially starting a civil war and chaos at court. However, her plan didn’t work out exactly. Multiple things go wrong and along the way Theo starts falling for S∅ren which complicates things and their plot to poison Theo’s best and only friend and her powerful Father goes wrong when she survives and the rebels are discovered. But they’re still able to escape by depending on S∅ren going to recuse Theo and then turning on him and keeping him captive on a ship of Astrean’s temporary pirate ally, Dragonsbane.

In the end Theo and the other rebels get away but the story is far from over and Theo is set on going back and freeing Astrea, overtaking The Kaiser and getting revenge for how the Kalovaxians treated everyone in their way.

My Comments, including spoilers:

One important part was a specific and very powerful scene that shows when Theo discovered the extent of Astrea’s destruction, when she first meets with Blaise (one of the rebels) he informs her of what has been happening while she’s been stuck in the palace. Tens of thousands of her people were killed or put in terrible positions and made to be workers and slaves.

Something that I really loved in this story was the main character’s two names and how much symbolism and power they hold. In the palace and court she is referred to as Thora but her actual name is Theodosia or Theo for short, this is why throughout this review I refer to her as Theo even though for lots of the story she’s called Thora. I personally quite liked both names but I also really liked seeing her be able to feel more like herself and take back even small parts of herself by being called Theo again.

I also really liked how it showed Theo feeling torn between two versions of herself and feeling unsure of who she really is if she wasn’t acting like Thora at the palace. And it’s very powerful when she tells people who have only ever seen her as Thora her real name is and reveals who she actually is.

I quite liked S∅ren’s character and his relationship with Theo, I thought it was really interesting to see how he changed because of getting to know her and how that affected him. Seeing how his Father and people were treating Theo, someone he now cared about, was eye opening to him. I think after that he understood more about how his actions affected other people, it seemed like he understood why what he did, and had been doing his entire life, was wrong and unfair. He was even willing to stand up to his Father for Theo and let her kill him if that’s what she wanted.

The only thing I slightly dislike was the slight love triangle between Theo, Blaise and S∅ren but even that was done well. I just would generally like to avoid this trope but again that is my personal preference. It definitely showed Theo feeling torn and not wanting to like S∅ren but still falling for him and ultimately not being able to kill him but still betraying him. She doesn’t know what she feels for him and it really shows through her actions and is a great immersion and expression of her inward emotions.

I thought Crescentia or Cress as she’s often referred to was one of the most interesting parts of the entire story. At times she seems very different from the other Kalovaxians but once Theo starts to really open up to her Cress completely changes. Their friendship was interesting because Cress was often the only person there for Theo even when she knew that she shouldn’t help her. But then towards the end of the book their dynamic completely changes and they start strongly hating each other. I think how Cress survived being poisoned is another mystery to be solved later on in the series, but the guilt Theo has for turning on her best and only friend for years will most likely be influential to her in the following books as well.

I liked how The Kaiser and Theo’s interactions and relationship are used to show how uncomfortable and unsafe she was in the palace and why she was prepared, ready and justified to risk everything to escape and take back Astrea. The Kaiser was obviously a terrible person who used everyone and everything beneath him, but he specifically took interest and joy in treating Theo the worst. These scenes were even uncomfortable for the reader but I think they were definitely necessary parts of the story and I think it just builds more and more anticipation for Theo getting revenge on him and taking back everything he’s taken from her and her people.

The Ash crown he forces her to wear is a prime example of how badly he treats her and wants everyone to know he controls her. It’s pretty disturbing and overall a really interesting aspect of the story altogether.

There is definitely something to be said about the racism within the story, I don’t think it could be realistically compared to anything in actual history because of the fantasy elements but it is especially frustrating and infuriating to read. I thought the details of including the different religions, languages and other cultural differences really made the entire thing feel more real. As well as the detail of gems that were God-given and could give Astrean’s power were only ever worn as accessories and trade for the Kalovaxians.

At multiple times in the story people or events force Theo to make difficult decisions and at certain points I found it to be very engaging when she makes a questionable decision or takes a risk and as readers we can’t do anything to change it besides powerlessly read on and hope for the best.

Again overall this is a very good story and I loved reading it. It uses lots of different elements of the story to make readers 100% on the rebel’s side and want them to win, which is why when Theo is in bad positions or it looks like the rebels might get caught it’s even more emotionally gripping. If you’re into fantasy with rebellious characters and a hint of romance then this is the series for you!

I have started reading the other books in this series and will be posting reviews for them soon.