In the city of Kos, mages can call sins forth in the form of sin-beasts, dangerous creatures made of guilt.

Taj is the most talented of the aki, sin-eaters tragically destined to kill the sin-beasts and bear the weight of other’s guilt. Taj tries to navigate his world and survive to provide for his family.

But when Taj is suddenly captured by the Royal family, he’s forced into working towards a sinister plot to  destroy Kos. Now Taj must fight to save everything he loves and knows, but as time goes on it’s even harder to tell which side he should be on. 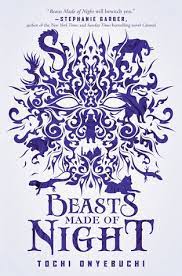 I give this book four stars (out of five). This is a very compelling, interesting and well written story. It has a really great concept, characters and plot. My favourite part was the main character Taj, how unique he is and the good use of characterization and descriptions throughout the story.

This story follows Taj and his other aki friends just trying to survive in the hard world they live in. They’re sin eaters and they get paid to eat the sins of others so they can remain pure and when they eat sins tattoos that match the sin beasts of various animals appear on the aki’s skin. Taj is one of the most well renowned aki and his sin spots never fade, making him even more recognizable.

Throughout the story Taj just tries to navigate his world and survive, until he is eventually captured and offered a job as the personal aki for the Royal family and King. There he sparks a romance with Princess Karima and has to make dangerous decisions, what they want him to do verus what is right for Aki and everyone else. He later ends up in a camp training young aki and stumbles upon some mages and other powerful people working towards a rebellion.

[Spoiler warning, skip the next paragraph to avoid them but there are some spoilers throughout the rest of this review anyways, so if you want to completely avoid them than stop reading here.]

By the end of the story the rebellion was strong enough to try and attack the royal palace, Taj was at the center of it when everything went wrong and everyone had to decide what side they were on very quickly. People changed, characters betrayed each other and it was a very intense fight. Nearly all hell breaks loose and it’s all Taj can do to escape with the other rebels and hope his friends and family survive.

My only problem with this story was that it was too into its own world at points and sometimes got a bit confusing. You have to pay attention to small details otherwise you’re going to miss things that become more important later on. I still really liked the world but I was hoping for more explanation and background knowledge as well, so it would be easier to understand and follow the story.

The climax was very good and engaging but also sort of confusing because you couldn’t really tell who was on who’s side since there were so many twists, changes and characters turning on each other. I still really liked it and how Taj’s unique abilities gradually developed only to be on full display in these scenes. Those include things like his sin-spots not fading, his ability to verbally control sin-beasts and even call forth his own sins. Overall I really liked this book and after finishing this one, I can’t wait to read the sequel and see what happens next in this fascinating storyline. I will write and post a review of that once I finish reading it.