Because It Is In My Blood By: Gabrielle Zevin (Birthright Trilogy #2)

Anya Balanchine is finally back on the outside, and now that she’s free she faces even more danger than before. She soon learns that being a part of her family instantly makes her a target and she has to leave New York for her own safety. In this book Anya learns more about the world around her and the difficult cacao trade her family is wrapped up in, taking her with them. 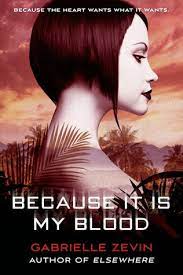 I give this book four stars (out of five). I read this entire book in less than a day, because once I started reading it I couldn’t stop. So many things happened in this book, I don’t even know where to start. There were so many plot twists and changes that it took me a while to understand what was going on at certain points, but I still really loved reading this book. It really tells a great story, and I love all the characters.

For this series I’m not going to be giving plot summaries, mainly because they’d be very long and it would be hard to give an accurate overview without spoiling many plot points. But for a basic idea of what happens in this book, after finally being freed of the burdens put upon her in All These Things I’ve Done, Anya is forced to flee New York. She safely makes it to Mexico and stays on a cacao/chocolate plantation, there she learns more and more about the dangerous cacao trade business and why her family is often the target of dangerous attacks.

[Spoiler warning for the next paragraph, skip to avoid them. This is really only for people who have already read the book, since it spoils one of the plot twists.]

After reading the first book in the Birthright series I was expecting Anya to take over the family business with Yuji Ono, but obviously that didn’t happen. I don’t know how Anya could’ve seen that he was only being nice to her to get what he wants. I as a reader certainly did not see that twist coming but I’m glad the character could.

Even though many of the important people don’t like or support Anya Balanchine, she is still strong and brave. I honestly think that this could take place in 2083 like a future similar to this could happen in the future, because at first I thought the story took place farther into the future but I can see it in the near future as well. Overall I’ve really liked this series so far and I’m excited to finish reading it.