Below By: Meg McKinlay

Lower Grange was drowned. Now it’s called Old Lower Grange and all the residents live in New Lower Grange, the drowned town becoming the local lake. Cassie never lived in Old Lower Grange but she still finds herself drawn to the lake and the town below. As the water level drops more and more of what lies beneath can be seen and secrets start to come to the surface. 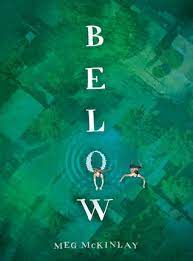 I give this book four stars (out of five). I love this book! It’s very well written and entertaining. It’s about a girl named Cassie who’s town was drowned to make a lake and everyone moved into a new town. Cassie was born eight weeks early on the day of the ‘drowning’ and Cassie has always been hung up on the Old Lower Grange. The whole town she never knew and now never can.

Since Cassie was born prematurely she has to swim a lot to keep her lungs working properly. Cassie is twelve and the Old Lower Grange had been a town for 88 years, they celebrate 100 years of being a town (that’s considering Old and New Lower Grange as the same town). Cassie decides to switch from swimming at the crowded local pool to at the lake (on top of the drowned town), but not at the swimming area instead she swims at the other side. She gets there by going through a break in the fence and ignoring the rules about trespassing.

Except, after a couple of really dry years the water level in the lake has decreased significantly. When Cassie swims at the lake she sees the top of the Fire Tree, an old tree they had that had been used as a fire lookout, with pegs and platforms so you could climb up and down and stay at the top. She swims to it but struggles to get back to the shore, Liam (a guy in her class) had got curious when she stopped swimming at the pool and followed her to the lake. He helped her to the shore. Liam was in a very bad car crash when he was very young. His twin brother died and his dad was left mentally disabled. No one knows what really happened or why they crashed.

While swimming together at the lake they discover a shed underwater and want to see what’s inside. Eventually they figure out that there’s a car inside. Finkle is the mayor of the town and he’s always weirdly nice to Liam and his dad (giving his dad jobs, paying for things for Liam, etc). He pushed insanely hard to have the swimming area on the other side of the lake and freaked out when he realized that the water level was so low you could see the fire tree.

Cassie put the pieces together using city council meeting notes (that she has access to because her sister works for Finkle), old newspapers and some logic to figure out that Finkle was involved the night of the crash. Whenever Liam’s dad sees red he gets mad or panics and no one knows why, but Cassie figures that it’s because Finkle’s car was red and if he was in the crash that would make a lot of sense.

She tells Liam and he has to agree with her theory, because there are many clues all adding up. But they decide to get more evidence and proof before they tell anyone. They’re going to have a big fancy ceremony to celebrate 100 years of being a town, and that’s when Cassie and Liam planned to sneak away and get evidence using a waterproof camera. But right before the event they find out Finkle plans to add more water to the lake to cover up the shed, so it can never be found.

They rush to the lake near the shed but he isn’t there, because he’s at the control panels working with engineers to add more water. Without time to consider their options, Cassie jumps into the water and swims as fast as she can over the majority of the lake, to where she could be seen. While she swims Liam and her siblings get help. Finkle doesn’t see Cassie or he doesn’t care and water starts pouring out of the damn anyways. But before it’s too late, a CTV helicopter comes out of nowhere and gets in the way. Forcing Finkle to stop the water and getting Cassie out of the water. Finkle confessed to being in the crash, saying he was tired, a bad driver and speeding and drowning the entire town to cover up his crimes. In the end, Cassie and Liam are both okay and happy. Liam’s dad is happy as well and it’s a happy ending.

I always loved this book’s ideas of Atlantis being real, could you imagine leaving your house, moving into a similar but slightly different house, drowning your entire town in five thousand swimming pool’s worth of water and then swimming on top of your old town as if it was just an ordinary lake. That’d be really weird, right? Anyway, I really enjoyed reading this book and I’ve read it multiple times. The first time I read this I was pretty young, so over the years I’ve reread and I find it very comforting, since I already know how it ends.