Between the Spark and the Burn By: April Genevieve Tucholke (Between #2)

In the thrilling sequel to Between the Devil and the Deep Blue Sea, Violet White’s story continues as she and her friends go on a long journey across the country to find River West. But along the way they’re always just a step behind him and they can’t seem to catch up. But things are never as they seem, and Violet soon learns that she can’t even trust the people closest to her. 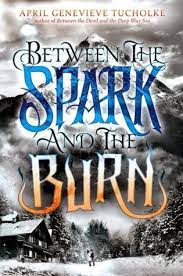 I give this book three stars (out of five). I really enjoyed reading this book, it’s the sequel to Between the devil and the deep blue sea and it was really good. The main plot of the story is that it’s winter break and it’s been months since the events of the last book. Violet White tries to find a different character from the first book named River and her search takes her and her friends all over the country.

[Major spoiler warning, skip to the last paragraph to avoid them.]

The main plot twist at the end of the book is that a character which joins them part way through their search is actually the villain from the first book in disguise. However after a big fight with a whole bunch of magic, they all go home. Everything’s back to normal or almost the way it was before, except they found the River and villain and they brought both of them home with them. The villain character named Bordie is in a weird mental state, he does what he’s told but doesn’t have full self control and isn’t really there.

I don’t really like the ending, in fact I think it’s kind of boring and disappointing compared to the rest of the story. Not much changes from the beginning of the book to the end, sure lots of things happened during the book but it doesn’t really show enough change from the beginning to the ending. It’s almost like nothing changed and the only things that did are a few details, there’s no big character development for anyone so it doesn’t really seem like everything the characters did matters or had an impact on the outcome.

Overall I still enjoyed reading this book and even though I didn’t like the ending, I still thought it was good and worth reading.