Breathe is a terrifying ghost story, with compelling characters and real danger Jack must find a way to stop and help the ghosts in his new house. With his asthma slowing his down and other horrors holding him back, will Jack be able to unravel their story of lies and confusion before it’s too late? 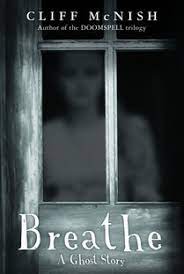 I give this book four stars (out of five). This book is very good, for me it was a very good introduction to the horror genre and I definitely plan on reading more. It’s just the right amount of scary, so relatively young people can read it but it’s still pretty scary.

Jack is moving into a new house with his mom, Sarah. Ever since Jack’s dad died Jack has found a strange connection to the dead, he can feel dead people who’ve been places before by touching furniture and objects. So he’s excited to move into an old house. There’s only one problem, the house is filled with ghosts. One is the Ghost Mother and there are four ghost children; Ann, the oldest (14), Oliver (12), Charlie (8) and Gwyneth (7). They’re all trapped in the house, being unable to move on because they didn’t right after their death.

[In the next few paragraphs I’m going to explain the story as what we find out is the truth in the end, not how it’s revealed to readers in the book. Major spoiler warning, skip to the last paragraph to avoid them]

The Ghost Mother used to live in the house centuries ago, she had a husband and a daughter. But they both caught tuberculosis, her husband dying first and her daughter soon after by suicide, upon seeing how her mother was living to keep her alive. The Ghost Mother’s guilt made her commit suicide as well and not let her loved ones take her to the Other Side after she died. But as the years passed her soul faded and faded away. The Nightmare Passage, is the place where dead people who refuse or can’t go to the Other Side go, it’s similar to Hell in that it’s a terrible eternal existence. It threatens to claim her and being desperate to avoid the Nightmare passage floats into town and feeds off a kid who was dying and taking some of his soul energy. Over the following years she takes more kids to feed off, keeping herself from entering the Nightmare Passage.

The Ghost Mother is more interested in Jack than the Ghost children. She’s always wanted a son and a living one at that! But Jack doesn’t love her even when he meets her, she’s a ghost and she isn’t his real mom. Plus her story with her own daughter Isabella and the Ghost Children just doesn’t add up.

The Ghost Mother ends up taking control of Sarah’s body and trying to trick Jack into believing that she is his real mother. But he finds out the truth and wants answers and to help the Ghost Children. But in an angry rage, she finishes off all of the Ghost Children’s soul energy and sends them all to the Nightmare passage. Then, she tries to kill Jack, who has really bad asthma and has been having attacks ever since he got here.

I really, really love this book. I summarized it so much it probably didn’t sound very scary but there are many intense chases and fighting scenes. I find that stories, especially horror ones, that focus on the afterlife are more scary for me, because of the real unknown there. Breathe is a terrifying tale and one that I definitely would read again.