Can’t Take That Away By: Steven Salvatore

This book tackles all aspects of life from romance, friendships, homophobia, dark times, loss and activism. It explores many different topics in a realistic view into life for a genderqueer person in America. 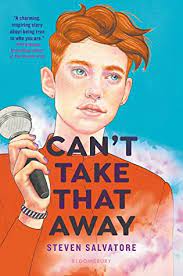 I give this book 4 stars (out of five). I really liked this book because the main character Carey identifies as genderqueer and this strongly explores topics of homophobia, transphobia, queerphobia and other forms of discrimination. I really like the way it portrays activism and shows how even everyday things can be dangerous for people who are seen as different or Other.

I really liked the way they showed those things through Carey and their difficulties and struggles, it definitely doesn’t glorify their life and shows how pride can come at a cost especially in schools, workplaces or other institutions that choose the side of the homophobes. I think this is a very good book on the subject, especially since the author is also genderqueer, and I would really recommend as something to read for allies or people outside of the LBGTQ+ community.

Throughout this review I use they/them pronouns to refer to Carey, the main character. Their pronouns change from chapter to chapter and from time to time but here I’m just going to be using they/them.

This story follows Carey and their journey to become a diva, just like the legend Mariah Carey (who they’re named after). But on the way they have to fight bigots, homophobes and many other problems. Like their Gram who suffers from dementia, their past suicidal ideations, lingering difficulty singing in front of people, constantly being tormented and bullied and their growing relationship with a hot guy named Cris.

Eventually Carey is convinced to audition for their school musical a production of Wicked with a real broadway guest director, Carey auditioned for Elphaba and got the part. Cris and Carey’s other friends also got other parts, but for a teacher named Mr. Jackson who is very homophobic and disapproved of Carey’s existence seeing them with a main role in the play, a typically female part, was enough to send him off. And when he saw Carey and Cris kiss he had a fit, claiming that Mr. Kelley, the amazing openly gay teacher that was running the play, was pushing some sort of gay agenda on the students.

And unfortunately the school Principal sided with Mr. Jackson and not only kicked Carey out of their role but also made Mr. Jackson the director of the play instead of Mr. Kelley. And when Carey was ruthlessly bullied, purposely misgendered and made the center of gossip that questioned the validity of their identity, the Principle also sided with the bully.

This wasn’t just about Carey, this was about all the students at their high school. This sent a message to everyone, “Here you can’t be queer.” Carey (and other students) didn’t feel safe and no one did anything despite multiple people bringing up their concerns and experiences.

So Carey and their friends decided to protest and rebel, they organized petitions to get Carey’s role back, to get Mr. Kelley back on the show and to get Mr. Jackson fired, as well as a walk out from all the actors in the musical, attending a School Board meeting and finally to having a chain link protest in front of their school. With Carey as the head of the campaign they got quite a lot of attention on social media as well, #LetCareySing was going round and even some celebrities had seen it and it got news coverage.

[Spoiler Warning, skip the next three paragraphs to avoid them.]

In the end the School Board and other protests didn’t change the final outcome so they made one last effort, everyone showed up to school early linked arms and blocked the front entrance. As people started showing up they refused to move, some students and teachers left or joined in, and eventually more and more joined forming a long and strong line.

Reporters were there and upon seeing what was happening Mr. Jackson was outraged and was so intent to get inside he nearly assaulted Mr. Kelley and Carey trying to get past them. It was then revealed that Mr. Jackson didn’t even have proper licensing and qualifications to teach, so he was arrested and the school finally changed their stance and let Carey and Mr. Kelley back in the musical as well as enacting some new anti-discrimination policies.

The final happy ending is Cris and Carey getting together and going to a Mariah Carey concert with their friends, and Carey even got VIP tickets and a chance to sing on stage because of the media coverage of their campaign.

In the very beginning of the story the best teacher ever Mr. Kelley gives Carey bracelets that use colours to show which pronouns they want people to use at any given time. These were super important to Carey and were pretty significant, throughout the book Carey frequently changes the bracelets and this was also helpful when it comes to explaining dysphoria or how being misgendered is offensive.

I really liked that they called each chapter a Track, which really fits with all the themes and rest of the story, and they also included Carey’s current pronouns at the start of each Track.

I think Carey had some really good and supporting friends, even a teacher and therapist that were influential characters. But I honestly didn’t like the constant conflict between Carey and Chris because it just felt a bit drawn out and it went back and forth a lot. Their entire relationship felt a bit rushed to me but I also see how they bonded over hardships and facing them together. I liked that while this story had a romantic storyline it didn’t overshadow the larger plot of activism and protest.

This story has very good development for Carey and by the end you can really picture them moving forward and accomplishing their dreams. I also liked that this included music written by Carey and the original lyrics fit very well with their story and character development.

[The following paragraph contains spoilers, please skip it to avoid them.]

I love this book because they managed to give their characters a happy ending without trying to act like small scale protests can fix queerphobia or stop people from being bigots. Mr. Jackson getting fired for not being qualified to teach throws into question whether or not he would’ve been fired if they didn’t find out, would he still be at the school? It leaves that open ended and doesn’t confirm anything but outright asks this question itself, it’s self aware and invites the reader to think about this and explore how things could’ve gone differently, especially if this weren’t fiction. But I’m super happy with the ending because I would’ve been absolutely destroyed if the protests didn’t end in at least some reconciliation.

Overall I really liked this book and I think it’s a perfect combination of exploring Carey’s personal life and dreams and the wider issues they face and how activism can help change that.