This diary formatted story retells the story of fourteen year old Prussian Princess Sophia’s journey to Russia, where she is renamed Catherine and married to Charles-Peter a German Duke. Her entire life is turned upside and down and Catherine is forced to try and sort out who she is now. 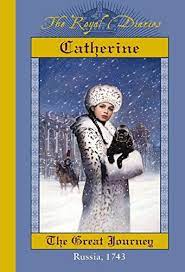 I give this book two stars (out of five). Although I think the story itself is well written and portrays the historical events relatively accurately based on my understanding, the authors and people working on these types of books really need to say more clearly that it’s fiction.

This book follows Empress Catherine the second’s teen years through a diary format. The story itself is fine, relatively good and educational. I just think they need to say upfront that it’s fictional because lots of young kids read these books and think they’re copies of the person’s real diary instead of fictional writing. Even though it does say that it’s created by the author at the very back, it’s hard to find if you’re not specifically looking for it.

Besides that I don’t have any other complaints about the book and I actually do like how the use of fonts and old english make it seem more realistic. Overall, I think this book and other Royal Diaries books are fine and somewhat educational for younger kids, I just think if kids are reading them you should make sure they know that some parts of it are fictional and not to believe everything as facts.

My overall opinion of the Royal Diaries:

Personally I never really enjoyed this book series even though they are and were very popular. The concept and idea is pretty cool, because it combines entertainment with actual education. I think my main problem with it was that it tries to bridge the line between a history book and a novel, it keeps the young readers entertained by jumping from event to event and stays historically accurate enough for it not to be just a list of facts, dates, names and events. For what it is it’s done well, but again overall it wasn’t amazing to me and I found it boring. Although I do think this series would be great for young children who are interested in history or specific historical figures.