Cracked Up to Be By: Courtney Summers 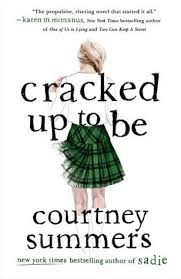 I give this book 3 stars (out of five). I picked up this book because I noticed it was by the same author as Sadie and I was interested in her work after reading that, as that was the only book that I’ve ever read by her and I’ve heard a lot of good things about her writing. This book was quite interesting.

Parker’s story is that she used to be the most popular girl in school and a major perfectionist, she’s the cheerleading captain, dating a football player, in honor roll, etc.  But after her friend is raped and disappears she sort of breaks down and loses it because she blames herself for what happened. After that she loses everything and starts showing up to school drunk and tries to alienate herself from everyone around her.

But it doesn’t fully work and now she’s in danger of not graduating (she also tried to commit suicide at some point). The book opens with the new kid Jake arriving at school and the rest of the story shows Parker trying to cope, graduate and decide whether she wants to isolate herself or if her relationships are worth maintaining.

I think the entire concept is very original and unique because you hardly ever see stories of popular girls after they fall from grace that go into the complexities of the characters instead of just labeling them with stereotypes. I think this was a very smart way to tell Parker’s story and I really liked the delivery. I liked the flashbacks even though the repetition did get a little bit confused and slightly annoying at times.

I really liked the main character Parker and her entire personality even though it was kind of the direct result of trauma and mental illness, she was very straight to the point, direct and mean but honestly I liked her. I’ve heard her described as an unlikable character but I can’t really see it. Anyone can be a bitch, but at least Parker has development, an actual story and keeps it real. I don’t see how anyone could really dislike her when reading her perspective and knowing all the reasons why she acts how she does.

I think Parker’s story is more sad than anything else and I think everyone should’ve really paid more attention to Parker sometimes, because even when she was really mean she was clearly struggling and to me it seemed like everyone either was so sympathetic that Parker couldn’t stand them or was just as mean to her and the only in-between was Jake.

I think it’s important to say that even if speaking out and sharing evidence or witness statements wouldn’t help in the sense of bringing the dead back to life or taking back terrible experiences, it is still very important and the importance was both a very important factor and downplayed in this book.

If Parker said what she knew they could’ve been a lot closer to figuring out who did it and bringing justice and closure to Jessie and her family, which is probably the best thing they can have at this point. It’s said at one point that Parker coming forward wouldn’t have changed anything, but it’s important to clarify that it would’ve changed things and the story probably would’ve been a lot different if she did.

Overall I really liked this book but I definitely wouldn’t recommend it to anyone who isn’t prepared to dive directly into what is essentially a dumpster fire from beginning to end. There is character growth and change in the end but it’s a long journey.