In this amazing story Cole and his friends travel into the extremely technologically advanced kingdom of Zeropolis and learn more about a new type of shaping, called Tinkering.

On their journey to find and rescue another lost princess, Constance, they work with a rebellion group called the Unseen and fight another form of strong shaping power. 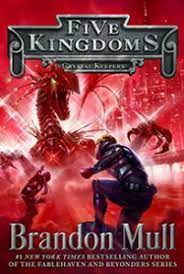 I give this book five stars (out of five). I really loved this book! Another great book in the Five Kingdom series, filled with adventure in a new kingdom. This book takes place in Zeropolis, filled with crazy advanced technology and a different type of shaping called Tinkering.

Throughout the story Cole is also constantly being chased by an Enforcer (member of the high king’s special police) called the Hunter who is specifically after him. While meeting up with members of the Unseen Cole gets sent on a mission in Junction (Capital of the Outskirts) at the First Castle.

On the way back he’s captured by the Hunter who tries to convince Cole he’s on the wrong side of the battle, but for Cole to prove that he’s right to be working for the rebellion Cole gives him information that would convince him to switch sides. Hunter goes to make sure Cole’s information is accurate.

Hunter also explains that he is Cole’s older brother from Earth, but he was taken to the Outskirts before Cole so he couldn’t remember him. It took him a while to convince Cole of the truth but eventually he believed him. Once Hunter finds out Cole is right he joins the Unseen and stops working for the King.

Throughout the rest of the book Cole rescues Constance and battles her shaping power in the form of a supercomputer with the body of a dragon, and they use the incredibly advanced technology to their advantage in an epic final battle. By the end, Cole and his friends save basically all of Zeropolis in more ways than one.

Overall, I’ve really enjoyed this entire series and this is my favourite book so far. I really like the main character Cole and how he discovers more of his family and about himself in this part of the story. I also can’t deny that I think it’s genius to switch the location in each of these books as the characters travel to different kingdoms, it keeps things consistent but also allows for change and keeps everything very interesting.