Emerson Yeung seems fine on the outside, but no one else would know all the stress he’s under. With the overwhelming pressure and demands of his parents constantly hanging over him. But when that still isn’t enough, his parents turn to abuse. Emerson is lost and when he can’t see a better way, he turns to the darker side of life. 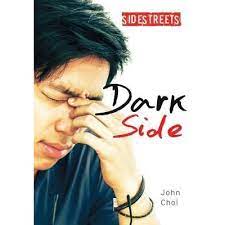 I give this book three stars (out of five). I really like the author’s writing style and the length and style of the book. It’s really short but meaningful and it has time skips in between chapters. The fast paced story telling makes each chapter important and not a single sentence boring. I really like the story too.

It’s about a young Chinese immigrant named Emerson Yeung, he’s in high school and she lives in Canada with his abusive parents. He’s depressed and suicidal, every time he makes a tiny mistake his parents freak out at him, building up his stress and anxiety as well. Eventually, after his phone gets stolen and random people make threats with his social media accounts and a whole bunch of other stuff happens, Emerson reaches the conclusion that he should commit suicide.

And he nearly does ,he plans it out, goes out to buy some rope and plans out when and where, etc. But coincidentally, while walking over to the bridge he planned to hang himself off, there’s someone else there. A young girl named Max, who’s about his age and they start talking.

He talks her out of killing herself and he realizes he doesn’t want to either. But as they’re walking away, she accidentally falls off the bridge and has to go to the hospital. He goes with her because she doesn’t have anyone else, she’s also depressed and has different family problems.

After that Emerson uses the internet to track down the people who stole his phone and confront them, but he ends up in a fight and nearly dies. That kind of shocks his parents out of their abusive behaviours at least for the time being. Max also starts doing a lot better, she breaks up with her abusive boyfriend and makes up with her family. In the end Emerson and Max are left together, friends or more and start figuring out the rest of their lives together.

Overall, I really liked the story but I think there are some parts that are just too unrealistic like the coincidence of meeting Max on a bridge or the ending. It’s good for the story but it’s pretty dramatized and unrealistic. Besides that this book is good and well written, although it is very sad and does not shy away from talking about depression, drug use, suicide and more potentially triggering topics.