England is being rocked by the country’s newest serial killer, known as The Perfect Killer.  She’s the most famous killer since Jack the Ripper, except she has different methods. She leaves no evidence and no trace. The Perfect Killer has a secret mailbox where people can drop off letters with money and then she might take the job and kill the requested person.

Kit Ward is just an average high school student, there’s absolutely no way she could be The Perfect Killer right? 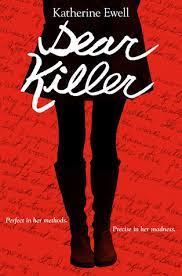 I give this book five (out of five). This book is amazing, the chilling plot, incredibly written characters and deeply insightful philosophy make it seem unbelievable that Katherine Ewell wrote it at only seventeen. It’s about a young London girl who has a secret double life as the country’s new up-and-coming serial killer, The Perfect Killer.

Kit Ward is the most famous killer since Jack the Ripper, she kills perfectly leaving no evidence and with her hands or using things at the scene. And her calling card is letters, she has a secret mailbox where people leave letters with money requesting her to kill someone. She collects them and kills certain people, although she doesn’t take all the requests but does majority of them. No one tells anyone where the mailbox is, although it’s in the women’s bathroom of a cafe even though everyone assumes the Perfect Killer is a man. Kit has been trained since childhood to kill perfectly, her mother is also a murderer and in her time she got too close to getting caught but wanted to carry on her legacy with Kit. She teaches her everything she knows and by the age of nine Kit has killed cleanly.

Throughout the years she learns her own way and style as her confidence grows so does her fame and eventually she becomes very well known, killing once or twice a month. Every time she leaves behind their letter, clean of all evidence and even though the letters often reveal the writer’s identity there’s no proof and they never talk, contributing to the secrecy.

Kit’s main rules are 1. Nothing is right, nothing is wrong. Moral nihilism, or the belief that right and wrong are determined by the society we live in. For example, in our society murder is considered evil but in a place where murder is completely normal it wouldn’t be, so what we believe to be right or wrong is only becuase of outside influences. 2. Be careful 3. Fight using your legs whenever possible, because they’re the strongest part of your body. 4. Hit to kill. The first blow should be the last, if at all possible. 5. The letters are the law.

She lives by these rules, but everything changes when she gets a letter for someone she knows. The letter’s for one of her classmates who’d recently fallen out of a friend group, Maggie. She befriends Maggie to the point where when Micheal, her kind of ex-boyfriend and the leader of the friend group she left (and the writer of the letter) is rude and threatening to Maggie during lunch, Kit punches him. Which did bring unwanted attention but was pretty much fine, until he got on her nerves too much and she decided to kill him on her own accord without a letter.

Also around this time her mom (a now retired murderer) invites a young handsome police man named Alex over for dinner and he just happens to be in charge of the Perfect Killer case, Kit befriends him too. When Kit finally gets around to killing Micheal in her perfect fashion in the bathroom at school, she also pretends to find the body. Alex is with her comforting her as she fake cries but half of those tears are real, since she just became a real killer. She wasn’t just an assassin anymore, she killed for herself and didn’t like what she was becoming. Diana, her murdering persona seemed to be more prominent than before.

After the whole thing with Micheal Kit’s mom had to teach her one more lesson, the one thing Kit never learned. Kit finally understands that she is needed, that people get too comfortable in their own little lives and they need a reminder of the chaos and fear that is life. Kit knew she had to lie low for a while before she could kill Maggie without being too suspicious, so she waited a good few months. Still being best friends with Maggie, going through school and for a good while she didn’t kill anyone, she waited until she felt clear and confident again. She did try to kill once but panicked halfway through and couldn’t get the job done. However rather fortunately the person she was trying to kill let her go when they realized the Perfect Killer was just some young girl (it’s a kind of a weird thing to do but whatever).

After a few months Kit decides the Perfect Killer should come back with a bang. So, instead of killing in people’s homes late at night or in some dark alleyway she decided to kill a businessman right in his office, by throwing him out of the 29th floor window and onto the street below and then quickly and quietly escaping. The Perfect Killer is back! Kit’s back to killing like normal, in fact with her new and increased confidence and a sense of purpose and meaning she kills faster than ever.

However, things start to unwind when a bit of DNA evidence found at a crime science is supposed to be tested against her’s and Alex tries to sneak some away during their lunch. People are getting suspicious, there’s too much circumstantial evidence linking her to the crimes. But Kit needs to kill Maggie if it’s the last thing she does, because deciding to kill Maggie set off the chain of events that eventually led to Kit’s downfall not just as a killer but as a person. She lost herself and her perfect ways because of Maggie and Kit wasn’t going to let her live. She killed her at a Christmas Eve party she was attending but forgot one pretty major thing.

In the end, right after Kit gets back from the police station her mom is packing their bags and getting ready to run. Kit packs up her stuff too, but right when they’re about to leave Alex comes to talk to Kit about Maggie’s christmas present. Alex defended Kit up until the very end when he noticed the thing she’d forgotten. She hadn’t brought Maggie’s gift with her to the party but she’d told Alex about it (during one of their lunches), so Alex knew what to look for and didn’t see it at the party. Although this technically isn’t evidence Alex knows her, she wouldn’t forget something like this and she wouldn’t bring the gift if she intended to kill her. Alex realizes the truth, that Kit is the Perfect Killer. And Kit is left with two choices: kill Alex and make a run for it, leave London and seek freedom or turn herself in and spend the rest of her life in jail. And after they have a life or death fight that Kit wins she decides, while looking into Alex’s eyes as he pleads for his life that she can’t kill him. She turns herself in, even though she could have easily gotten away.

Really it isn’t even the plot, characters or muder that are the center of this book, it’s the philosophy. It’s everything Kit did and believed in. It’s incredible and an amazingly satisfying read, 10/10 would read again.