Brassmare Academy for the Extraordinary is where Plum and many other children have spent their entire lives. But can they trust the adults who have always been their only source of guidance? Plum, Vien, Gwendle and Atrem can tandem dream together and they’ve been doing so for years. But when things take a turn, their dreams do too. 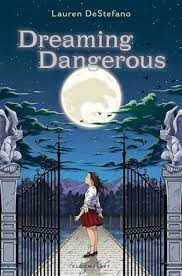 I give this book two stars (out of five). It has a great plot, engaging characters and plot twists. The main characters are Plum, Vien, Gwendle and Atrem and they live in Brassmere Academy for the Extraordinary. A school for orphans who have strange or wonderful gifts. Plum, Vien, Gwendle and Atrem tandem dream with each other, they’ve been there (and dreaming together) since they were babies taken in by Dr. Abarrane.

There are many different kinds of extraordinary children at the academy, they live, go to school and train there, it’s their entire lives. So when weird things start happening to Plum and her friends it’s startling and forces them to question Dr. Abarrane and everything they’ve ever been told about their lives at Brassmare.

Atrem goes missing the same night Plum has some trouble sleeping and weird dreams that are warning her ‘They’re coming for you’. Plum, Vien and Gwendle look everywhere for Atrem but they can’t find him, Plum is put to sleep by Dr. Abarrane because she hasn’t been sleeping. It isn’t normal, she can’t wake up when she normally would (when she dies in her dream). Plum meets up with Atrem in her dream the next night and runs away from Brassmare.

She follows the only road near the academy and finds a ‘hospital’ (keep in mind she’s never left the academy and she doesn’t know what a hospital is). She frees and wakes up Atrem, they escape together and rush back to Brassmare to tell everyone what they’ve learned and free them. At the hospital after overhearing Dr. Abarrane they realize they were never orphans and they were actually taken from their families.

However, when they get back to Brassmare to try and save all the other students they have to fight their way out and end up back at the hospital, but all four of them were caught this time. Dr. Abarrane puts them all to sleep again and after Plum wakes up he tells her the truth. Plum, Atrem, Vien and Gwendle were among many kids treated for the Red Flu by Dr. Abarrane, however the side-effects made them extraordinary in many different ways. He then killed their families or just took them and raised them in the academy saying they were orphans and training them to use their powers. After this the four of them escape and walk away, into a world they’ve never known.

The ending is terrible, there’s an Epilogue and they all live far away from each other but still dream together sometimes (on birthdays and stuff). But they never mention what happened in between the ending and the epilogue, but there was so much more waiting to happen and they don’t give an explanation about Brassmare or Dr. Abarrane (who’s still alive) or how in the end they say they’re going to go back for the other kids from Brassmare but you’re not told if they do or not.

I was really confused when I read the ending and I literally reread it twice to make sure I wasn’t just missing a part. Sorry for ranting about the ending but you’d understand if you read the book, it was really disappointing.

Although I don’t like the ending I still think the book overall wasn’t too bad, it just feels like the author was rushed to finish the book and had to make it shorter then they originally wanted to. Like when you have to write a short story for school but then after you get half way through you find out that it’s due tomorrow or there’s a page limit so you have to shorten your story.