Elsewhere is so similar to Earth, it’s warm, pleasant and peaceful. It’s easy to forget that everyone there is dead. The Elsewhere is the afterlife and there everyone ages backwards. When fifteen year old Liz ends up in Elsewhere she is beyond confused. Now instead of graduating and learning to drive, she’s only going to get younger. Liz has to figure out how to live in the Elsewhere, but can she stop wishing for life soon enough to enjoy her time there? 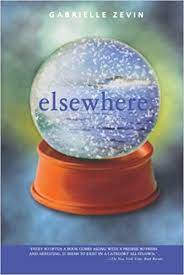 I give this book a 4.5 (out of five). I loved this book, it’s so well written and detailed. The plot is really interesting and a good structure. The story is about a fifteen year old girl named Liz, who dies and wakes up on a boat filled with people. She recognizes some people, but she doesn’t realize what’s really going on until she’s told to watch her funeral.

Then she finds out that she died and has to deal with all the different challenges of the afterlife. In this afterlife everyone ages backwards until they are reborn, so they get jobs, homes and make new lives for themselves while they’re there. While Liz is living in the afterlife she makes many attempts to get through to her living family, but she can never really communicate with them. She also meets and falls in love with a guy during her time in the Elsewhere.

I’d give more details of the rest of the story but I don’t want to spoil too much about the plot, so it makes it pointless to read the book. But it’s the story of a young girl trying to adjust to living an entirely different life.

It might seem a little boring at first, but trust me it’s worth the read. The transition into the afterlife leads Liz to do many things including breaking a few of the afterlife’s laws and leads her into a dangerous yet interesting romance. Anyway, I really like this book and I really recommend this to anyone who would appreciate an interesting story about grief, death and what might be elsewhere.