‘Ember Queen’ is the exhilarating conclusion to the Ash Princess Trilogy, will Theo finally succeed in freeing her people and taking back Astrea or will the Kalovaxians and Theo’s enemy Cress win the war and continue their cruel reign. 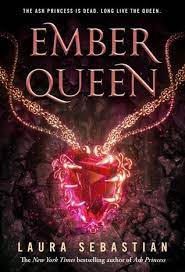 I give this book 4 stars (out of five). This is the thrilling conclusion to the Ash Princess trilogy, and all I can really say is that it’s one hell of a ride especially if you’re already attached to the characters and story so far. I think this is definitely worth the read although it isn’t my favourite book in the trilogy, my favourite is still the first one Ash Princess. I’d like to say that this series as a whole has lots of diverse characters as in there’s characters of all sexualities and races.

The only reason I didn’t like this book as much as I’d initially hoped is because it’s very repetitive, there’s lots of planning and different tactical battles, because they’re in the final stretch of the war, and fighting. But it gets repetitive and kind of boring because many of the battles feel the same and there aren’t always high enough stakes to make it feel very important.

This installment of the story follows Theo and her allies as she comes out of the Air Mine and rejoins the fight. They’re at war with the Kalovaxians and Crescentia, who thinks Theo is dead. So when they start seeing each other in dreams at first Cress thinks Theo is visiting her from the After or invading her dreams and it takes both of them a long time to realize that they aren’t just dreams. They’re actually able to see and interact with each other through these dreams, which is later revealed to be because the Encatrio (poison) that Cress gave Theo in Lady Smoke was actually her blood. Later Cress gives the Encatrio to other girls as well and they also share dreams.

There’s many more battles as the Astrean side gets more and more powerful and can use their guardian’s powers to help them do things no one else can. They can hold illusions and have superior abilities during battles, which help them win and deceive their opponents. Theo herself has a strong gift of fire, because she always had a small gift but after drinking the Encatrio and going into the Mine her powers are a lot stronger and after working Blaise for a while, she is able to control them better too.

The only thing in this section that really matters is that after a battle in which they took the Water Mine they discovered two prisoners Brigitta and Jian, Brigitta is Cress’s mother who ran away from court with Jian years ago. They are alchemists who have created a weapon of incredible power, a gas called Velastra that can take away someone’s control of their body. It gets rid of their soul and makes them do whatever people tell them to, even kill others or themselves. This weapon could be used to completely destroy people and Cress wants it.

[Spoiler Warning, skip to the last paragraph to avoid them.]

Theo and her friends come up with the plan to separate Brigitta and Jian since he is the one who created the weapon and likely knows more about it, originally they were going to say that Jian wasn’t found or died but a young boy volunteered to go in his place while under an illusion. This is very important because they didn’t know that Brigitta was also a test subject for the Velastra and the answers for creating it are quite literally in her blood, so Cres is still supplied with the answers she needed despite their attempts to stop her getting the information without detection.

In the final battle Theo and her allies have decided to ambush the palace now run by Kalovaxians. They’re doing this by reuniting with all of their forces (about half of their army separated a while ago to take the Earth Mine) and using the tunnels that Theo and Blaise know about from when they lived there, this allows them to have strong numbers and the element of surprise.

The first thing they do is break into the dungeons through the tunnels and free the prisoners, getting the Astrean’s who can’t or won’t fight out safely back in the tunnels and handing out spirit gems to any guardians who can help them. Because most of them have some type of powers they are able to heal the injured ones and later kill all the guards.

After that they come up from the dungeons and join the siege that has also started with other Astrean tropes fighting into the palace. Amidst the fighting Theo and her friends are quick to join, Heron (one of Theo’s closest friends from the first book) is stabbed and injured. This enrages Theo so much that her fire power springs to life and she is able to kill every single Kalovaxian soldier in that room with just a touch, then she must also use her gift to help Heron remove the sword so that he won’t bleed out.

Afterwards both Theo and Heron are worn out and forced to sit out for a while in Theo’s old room before they jump right back into the fighting. While they’re there Theo gets another vision of Cress inviting Theo to come to the Throne room alone to settle it between them two only, Theo decides to go and Heron comes long because he can make himself invisible, on the way there they also run into Blaise and he joins them.

When Theo meets Cress she has a trap prepared for her, thousands of Astrean slaves are gathered under the balcony and ten of Cress’s wraiths (girls she controls) hold cases of Velastra over the crowd. Some people had even been given weapons and were from the mines so they’d be even more dangerous when under Cress’s control. Theo keeps her talking while she tries to figure out what Heron and Blaise are planning, with limited communication she realizes they want her to jump off the balcony so she does and is guided by wind to a nearby dead tree. Then when the wraiths drop the glass cases of Velastra but they are lifted upwards and break where they can’t hurt anyone.

The wraiths still have fire powers and are ordered to burn down the crowd of Astreans, Blaise is there in time to stop them using his Earth powers although using his powers extremely will cause him to lose control and need to be killed. Blaise is able to protect all the Astreans by making the tree grow to shield them and stop the others using earthquakes before he loses control and Theo has to kill him.

This marks the end of siege and Astrea wins back the palace and the country, Astrea won. Theo’s the leader now and her first big decision is what to do with all the now imprisoned Kalovaxians, she proposes trials that will be overseen by people representing all the different nations the Kalovaxians have conquered because everyone committed different degrees of crimes and she doesn’t want to punish children for their parents actions because that could lead to another war in the future generation. The Kalovaxians have destroyed nine different countries so the people who aren’t sentenced to death will be sent there to help rebuild those places and become citizens of that country along with their families.

Before joining the celebrations Theo visits Cress in the dungeons, she offers her a dagger with the opportunity to die in private and by her own hands rather than the public execution that had already been set. She does this because once Cress  offered Theo kindness when no one else did and even in death and when they are enemies Theo wants to offer Cress that same kindness in return. In the end Theo offers an amazing speech to her people on their freedom and finally claims her throne as Queen Theodosia.

Also throughout this book Theo gets her memories back of what happened when she was in the Air Mine, she went through three very traumatic trials while she was in there which resulted in her being powerful. First she had to leave her mother behind while she could’ve chosen to stay with her, then she had to face the ghosts of all the people that have died because of her or her decisions and then she had to face off with Cress in the final trial. She survived all of these things and that ultimately shaped who she was going into this part of the series, but she only got her memories back as the story unraveled.

The main things that I want to talk about for this book are Blaise’s death, the general themes of feminism and the parallels between Theo and Cress and their respective countries.

Blaise’s death is something that has been brought up and nearly happened at many points throughout the series, ever since they realized he has mine-madness in the first book. There were multiple times when he lost control and had to either be knocked out or nearly killed so he wouldn’t hurt others. His death was definitely something that many readers would’ve been able to foresee, there were already many instances where he nearly died or already tried to sacrifice himself in the past. So it’s not surprising that it actually did happen in the final battle, I actually really liked how it happened here because he was the only one out of the main selection of characters that died during the siege. This allows Theo and the others to still have each other and be able to move forward, while still feeling very solemn because not all of them made it out alive.

Throughout the series there is also the theme of feminism because Cress wants to empower other women to be like her and be able to get back at all the men who made their lives terrible. This seems like a good thing because it means giving women more positions of power and opportunities to take control of their lives even when they have previously only ever been seen as property or things to look at. But the way Cress gives them power is by nearly killing them in hope that they survive the poison, whereas on the opposite side Theo is in power with the Astreans and treats all of her people as equals.

There are some really interesting parallels between the Kalovaxians and Astreans, the Kalovaxians have very strong gender roles and always have male leaders whereas the Astreans have Queens and don’t have strict roles either way. There’s also many direct differences in the way they treat their own people and others. When looking at Theo and Cress specifically the parallels between them are really what makes their rivalry or conflict more compelling, especially since they were a lot closer in the beginning of the series.

Another thing that contributes to the complexity of their relationship is that they both would do anything to fight for their country, including putting their personal relationships aside. Theo was able to try to kill Cress even though she was her only friend and she also killed Blaise herself, and Cress was able to do the same thing to Theo too. But Cress was a lot more focused on herself rather than her country and people, but she was still able to kill and hurt people she was previously close with like her mother.

Overall I really liked this series but I still think the first book was the best, both the other books had more build up than payoff and felt like filler at times. I still loved the series and the story but I think it would’ve been better if it was more concise.