Every You, Every Me By: David Levithan

Evan lost his best friend Ariel, she’s gone now and he doesn’t know what to do without her. But when he starts being tormenting by a mysterious person blaming him for what happened her to, he is forced to try and cope with his grief while figuring out who is leaving pictures for him to find. Who is messing with him and why? And how can he make them stop? 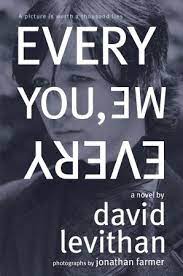 I give this book three stars (out of five). I really liked this book, it’s mysterious, ominous and dark in all the right ways. It’s about a high school student named Evan, he’s just lost his best friend Ariel in very weird circumstances (that aren’t fully explained until the end of the book). He’s trying to cope and get on with life although it’s practically impossible, especially since she was basically Evan’s only friend (his only other close friend being Ariel’s boyfriend).

And it’s not like Evan is rushing to forget her (his guilty conscience and never-ending insomnia getting in the way). Until he’s walking home one day, when Evan finds an envelope with a picture of the woods where he is inside it. He looks up and sees the exact same trees as in the picture, the next day he finds another one in the same place. But this time it’s a photo of him. He keeps finding more and more photos; in the woods, in his locker, everywhere and anywhere.

He tries to piece it together and figure out who’s doing it and why. There’s even some pictures of Ariel, this leads Evan down a dangerous path of grief, crime and desperation. Evan does everything he can to find out who’s behind the photos and what they mean.

After ages spent working and trying to figure it out, it’s revealed that Ariel’s friend is doing it because she thinks Even is to blame for Ariel getting sent away. It’s also revealed that Ariel didn’t die or commit suicide like we’re kind of lead to believe; Evan and her boyfriend stopped her from killing herself and she got taken away to a psychiatric hospital.

In the end, they have this whole confrontation with Ariel’s friend Dana, she thinks that Evan didn’t understand Ariel and she did but they both betrayed her. Because she wanted to die and they stopped her. Although they never come to an agreement on that, it’s actually Dana’s actions that get Evan to come to terms with what happened and move on (even after all the torment from Dana).

Overall I really liked this book, specifically I liked how it brought up the question on whether or not it’s the right thing to do to save someone who wants to die. And I loved all the characters, even the jerks, they’re all incredibly well written. Another few thinks I like was that they included real photos in the book to show what they would look like, there’s a lot of text that got crossed out and all the chapters have multiple parts, like Chapter 1b or 7d which gives the book a lot more character and makes it seem more real because it’s from Evan’s perceptive.