Everything, Everything By: Nicola Yoon

In this book the main character Maddy as an extremely rare illness, so she needs to stay inside in a protected environment. But everything changes when a new family moves in next door, and Maddy meets Olly. Though their problems are very different, they are still dangerously drawn together and learn what it takes to truly live even if it means losing everything you thought you knew. ‘Everything, Everything’ is a teen romance with an incredible plot twist that left me shocked. 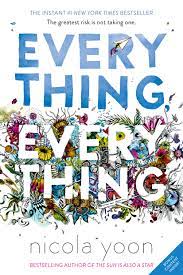 I give this book 4 stars (out of five). This book was very popular which is why the main plot twist was so effective and took me by surprise. It had gotten very popular and lots of attention, so I thought I knew what type of story I was getting into when I started reading. Although there were definitely parts of it that were exactly how I thought they would be, it also was able to surprise me multiple times. Notably before reading the book I had seen the trailer for the movie so my expectations were relatively based off of that.

This story follows the main character Maddy, she has Severe Combined Immunodeficiency which means she has extreme allergies to basically everything and she has to stay inside in a protected and air filtered house. She has a personal nurse and she hasn’t left the house for years. That is until a new family moves in next door and she starts talking to the boy her age named Olly. [Spoiler alert] They fall in love and Maddy takes some insane risks just to be with him. This eventually leads to not only her going outside but traveling to Hawaii and having lots of new experiences with Olly. But this does cause her to get sick and need to go home, where she (understandably) gets into a fight with her mom.

After being back for awhile Maddy gets an email from a doctor that treated her in Hawaii and they suspect that she actually isn’t sick and just has a weakened immune system (from not being exposed to the outside world). This leads to Maddy questioning her reality; going through her mom’s files and trying to find her diagnosis and then later getting tested to confirm it. And [Spoiler warning] Maddy is not sick. She has to figure out what to do next and how to live her life now that she can go outside and live a normal life (and how to reunite with Olly who had moved away after a while without talking to Maddy).

[Skip the next paragraph to avoid spoilers.]

The major plot twist is that Maddy is not really sick and her mother (who’s a doctor) just tells her she is so that Maddy wouldn’t go out into the world and get hurt. It brings up a good question; what would you do in Maddy’s position? Would you be able to forgive your mom for stopping you from having a normal life? Would you keep living with her? It’s a very interesting situation and one that should hopefully only ever be fiction, although it sounds similar to a case of Munchausen syndrome by proxy (MSBP).

I liked how there were various pages with art and simple designs on them to show different things, like how Maddy feels or what she’s doing, without straight up telling the reader in words.

And I thought it had a good and clear way of showing online conversations. I also really liked the plot twist but I also think realistically someone would’ve noticed sooner, because she had lots of nurses and other adults in her life besides her mom so someone probably should’ve realized she wasn’t sick, before she had to risk her life to figure it out. But it was still a really good climax and I liked how they showed what happened afterwards and how Maddy handled it.

However, I didn’t like the cliché of a girl meeting a boy and risking her entire life to spend time with him after only a few months or so of knowing him. In any situation that is not wise, in this specific story it worked out fine but it could’ve ended very badly and Olly would’ve had to bare the guilt of aiding the girl he liked to her death. It was a stereotypical rom com type story in the way that it made teen romance seem like the most important thing ever, and sometimes combined the opportunity to be in love with the chance to truly be alive (which can be true in some stories but I think is a bit extreme in these circumstances). I just didn’t like the portrayal and glorification of risking your life to have a high school relationship with someone that might not even work out anyway.

Overall I really did mainly enjoy it because of the plot twist but if it weren’t for that I would’ve disliked the story a lot more. I don’t like all the teen romance aspects of the story but I do quite like the concept and think this was well written for what it is. This style of story is definitely not for everyone so I think it kind of depends on the reader whether or not you like relatively cliché romances.