Rhine and her attendant Gabriel managed to escape the dangers behind them at the mansion, but that doesn’t mean they’re safe. Here they get stuck in a twisted camp, where girls are used for entertainment and money.

Rhine and Gabriel are determined to get to Manhattan and reunited with Rhine’s brother Rowan. But many things are blocking their way and Linden’s father-in-law, Vaughn, will stop at nothing to take Rhine. They’re running out of time and Rhine must decide what they’re willing to risk for freedom. 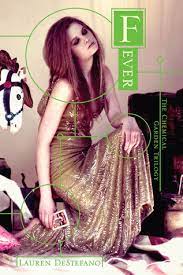 I give this book 3.5 stars (out of five). It’s incredibly well written, has great world building, characters and a cliffhanger ending. This is the second book in a trilogy, so if you’re interested in reading this please start with d the first book, Wither.

The main character, Rhine and her boyfriend/lover Gabriel have just ran away. They wash up on the shore somewhere but end up in a Scarlet District in South Carolina (they previously left from Florida and were trying to get to Manhattan). They get captured by one of the leaders of a prostitution group, where people can make money off Rhine and her special heterochronic eyes.

After some time being stuck with this group the leader, Madame, tries to sell Rhine to Gathers but, (okay this is where it gets complicated really fast;) one of the favourite girls there Lilac has a daughter, who is malformed and named Maddie. Madame doesn’t like Maddie and thinks she’s worthless. So through a long and complicated series of events Madame “kills” Maddie and Lilac and Rhine run off.

Eventually Rhine and Gabriel escape the group because Vaughn (Linden’s/Rhine’s husband’s father) found them, Lilac was coming too but got caught on the fence and couldn’t come with them, but Maddie made it over and ran away with them. They stow away in a delivery truck and steal money so they can get to Manhattan.

But once they reach Rhine’s old house they find that Rowan had burned down the house and left. Rhine’s house is destroyed and they have nowhere else to go, so they find the address written in a book they had in the bag Lilac threw them before she was caught. And found Lilac’s parents, Maddie’s grandparents. They run a big and good orphanage, most orphanages are run by mean and cruel first generations but not this one. They let Rhine and Gabriel stay at the orphanage as long as they help out, Rhine still looking for her brother on the side. After a few weeks Rhine starts to get sick. It’s really bad, it’s killing her and it looks like the virus even though she still has three years.

Vaughn shows up one day and talks to Rhine, he reveals the tracker in her leg and forces her back into the limo by threatening to set fire to the orphanage and kill everyone inside. She’s taken back to the mansion but not as a wife as Vaughn’s property, he keeps her there for months doing experiments on her and her eyes, slowly exposing her to the virus overtime to try and build up a tolerance.

Until one day Rhine has enough, she’s accepted that she isn’t going to get out or see anyone she really loves again but she can’t accept the tracker in her leg. She breaks out of her restraints and breaks some glass, then she cuts her leg with the sharp glass, desperately trying to remove the tracker. Linden finds her and is outraged that he wasn’t told about her, he takes her to a hospital where they finally do remove the tracker.

But when Rhine tries to tell Linden the truth she’s written off as delusion. Rhine tells Linden the truth about his father, Linden’s whole world was a lie so of course he wouldn’t believe it. The cliffhanger ending is that while laying in her hospital bed Rhine watches the news and sees her brother on the screen, meaning that he is alive.

That isn’t really a big cliffhanger at all but it’s so significant to the story that it feels like a major cliffhanger, and I can’t wait to get my hands on the next book.

Overall, this was another great book in the Chemical Garden trilogy and I recommend it, although it is a bit more mature and not for younger readers.