This story covers the aftermath of a fictional bombing in New York and tells all the survivor’s stories. Each person has a different experience and a different story of how they got there, how they’re affected and how they all come together. It explores the butterfly effect, survivor’s guilt and finding meaning in life and it’s done well. 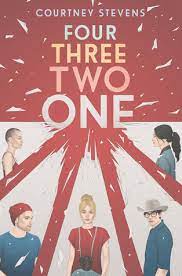 I give this book 4 stars (out of five). I think this book, although it is sad and slightly disheartening, I think it has a lot of good messages in it. This story is about the four teenage survivors of a bus bombing. Ten months after the bombing, they’re making an art installation of the bus made of the remnants of the destroyed bus and have reached out to the survivors to encourage them to come. There’s also a show about it and a donation site for the survivor’s college funds. The majority of this story is told from Go or Golden Jennings perspective, she and her boyfriend Chan are two of the survivors. They were in New York to try and take a picture together at a specific place to recreate a photo, but Chan’s bag was lost and because of that they started fighting. After the bombing they had very different approaches to dealing with similar trauma, even though they started fighting before the incident they weren’t the same afterwards.

{I really can’t accurately explain most of the things that happen in this story because so much happens and it’s all super connected and it’s too complicated to explain. So my summary is very, very basic.}

Chan, Go’s family and most people around Go didn’t want to talk about Bus #21, they’re trying to completely forget about it and move on with their lives. But Go can’t just do that, she wants to talk about it and she needs to process what happened, she can’t do that without talking about it. Ten months after Bus #21 Chan proposes to Go, with a promise ring, so almost like a proposal but for later. And Go accepts because well she kind of has to but she also didn’t think it was a good idea, or really a smart thing for Chan to do. Go is also extremely understandably scared of buses as a result of Bus #21. Go and another survivor Rudy (who was severely injured, now is in a wheelchair and still recovering) made contact with each other after through a Show talking about Bus #21. The fourth and final survivor of Bus #21 is a girl named Caroline, who was the girlfriend of the bomber, Simon. She’s also Rudy’s cousin.

Long Story short: Go and Becky (one of her friends from her community and an amazing character) are setting off on a road trip to hopefully meet Rudy and go to New York. They meet up with Rudy and stay with him and his family for a bit and then they go and try to convince Caroline to come with them. (Go only finds out that Caroline lives in the area after Rudy mentions that she moved in with their Aunt awhile ago.) At first it doesn’t seem like they’re ever going to convince her to go but eventually Go manages to persuade her, and she joins the group. Now, they’re on a (not-)road trip and headed to New York.

{Disclaimer: I am so sorry for how basic and bad that summary was but I can’t do it better without making it at least 15 more paragraphs, it’s frustrating when I can’t even begin to do a story justice but here we are. Anyways, the next paragraphs will be talking about things I liked about the book and there will be spoiler warnings, but most of them will have spoilers so I’m sorry. This review isn’t very helpful if you haven’t already read the book, but I’d definitely recommend it to you. }

Some things that I liked about this book, no spoilers:

The story is told from the main character, Go’s perspective most of the time but every now and then there’s a short chapter from Caroline’s perspective. Which I think is a great choice, it’s good for getting to know her character and understanding what’s going on. Also Caroline is just a great character anyway, so the insight into what she’s thinking or feeling throughout the book is a really good touch.

In chapters from Go’s perspective a lot of the time she refers to Beck by her full name Becky Cable, it’s a small detail but something I really like and I think it’s a good way to show how their relationship is and how Go thinks of her.
While the 4-5 main characters are on the road together they don’t really know each other and only have a few things in common/ that they know about each other, I really liked the way they got to know each other more. They didn’t just start talking about random things or ask very basic questions and stuff like that, they focused on the things that matter and jumped to the things that mean a lot to them.

‘Micro-moments’ sharing a memory of a specific moment in detail with someone else.

The community where Chan and Go lived in was called the Hive, which I think was a great name for it because it was a very tight knit community and has a very specific way of life. I think it’s a good example of a name with more meaning than just a simple or random name.

Some things that I liked about this book, slight spoilers:

This book shows how everyone processes, reacts and deals with trauma differently and people will have to do different things to move on or overcome that.

Go’s fear of buses, I think was really well written. The author shows it very well, Go knows her fear of buses is irrational but that doesn’t make it easier for her to overcome it or face it. She can face other fears (like riding roller coasters) but that fear is different.

Some things that I liked about this book, spoilers included:

The misunderstanding between Chan and Go and Go’s lost memories from New York. The scene or part during that dinner where Chan finally tells Go the truth about why he was super upset about losing his bag in New York and the real reason they ended up fighting. And the scene/part towards the end of their trip (the day before they go New York) where everyone comes clean about why they blame themselves for what happened and the guilt they’ve been holding. They all technically had a part in it, due to the butterfly effect, but none of them were to blame. It was a really powerful part, especially for Go who finally let herself cry in front of the others and forgive herself for the part she had in it and everything that happened.

The ending was also a great part, it was such an amazing moment for all the characters and it was just a perfect ending (in my opinion), it leaves what happens next up to you but also has a clear sense that whatever happens next the characters will be ready for and that it will be good.

Overall I love this book, I think it’s a really good story with good messages. It’ll make you think about and consider cool and important things. I 100% recommend this book.