What happens when Cassie tries to join a frat, even though she’s a girl? Chaos ensues, basically. 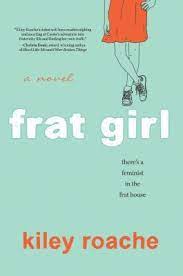 I give this book 4 stars (out of five) but there were still a lot of things I wish were done differently or expanded upon more. I really liked this book but I also found it to be very disappointing at the same time, for all the things it covered that I liked there was also something I thought wasn’t necessary or could’ve been much better.

In order to get a scholarship to Warren University Cassie needs to pitch an amazing project to be founded by a company that will also cover her scholarship and the cost of her attending the university. She doesn’t have any ideas until she happens upon a story of a fraternity at Warren that is on probation for previous inappropriate and extremely sexist behaviour. So, Cassie comes up with the idea to go undercover and join the frat, to study what the environment is actually like for women and what it’s like on the inside. Her idea is picked so she goes to the university and gets into the frat but she has to be secretive about her project and make a lot of fake friends. Although she does see a lot of bad things happening at the university, the people aren’t exactly what Cassie expected, they aren’t just stereotypes, they’re still real people even if they are sexist and ignorant.

The story follows Cassie through her journey with her project, even when it is mishandled by the adults involved and her story is taken and used without her consent. Also as she learns how to get along with the boys she once thought were insufferable, there are still some assholes and terrible people but there’s also friends, potential boyfriends and brothers. So life for a girl in a fraternity isn’t all bad.

During Cassie’s study there were so many times when the adults working with her were extremely frustrating, because they didn’t care as much about the real people experiencing the problem, they just cared about having a successful story. So when they had the most attention they ran the story without Cassie’s consent. Even in the ending Cassie’s real and final thoughts were never published.

I love the premise of this book, an undercover girl living in a frat house trying to document what the environment is really like. It’s genius and I was super excited to read it.

Some of my favourite moments were when Cassie gave the frat boys a SexEd class and when the boys came and threatened a boy who treated Cassie horribly when she wouldn’t sleep with him. I also really like this quote: “What’s the point of feminism if it doesn’t mean we’re free?” -Alex (Cassie’s best friend), pg. 216

Cassie is definitely the type of main character who does NOT have her sh*t together in any way, shape or form. She has a lot of flaws and one of the main ones is making assumptions about other people without knowing them or taking the time to understand their point of view. This results in many of the major conflicts but you can often see Cassie’s perspective change or her grow because of these instances.

I think this book says some of the really important things that need to be talked about, however I was also really disappointed by the plot, especially the ending because it felt really rushed and isn’t what I was hoping for at all.

I really didn’t like the romance between Cassie and Jordan, not because it was badly written but I don’t think there should’ve been a love interest in this story at all. I know that their relationship made it easier for Cassie to understand that frat boys are people too, but so much of the story centered around the romance that it really took away from some of the more important themes.

I think the friendships that form between Cassie and some of the boys in the frat are really important, they’re sweet at times and show that even stereotypical characters have more to them. This is also part of why I think the romantic aspect wasn’t needed for this story.

This entire book is about feminism and equality so I wish it focused on that more. There were some really amazing lines in here but it’s extremely frustrating that none got published.

There’s lots of discussion of different types of feminism especially in regards to sex, people think women just shouldn’t have it because that means not giving men pleasure but that’s restricting women too and it feeds into the mindset that sex is something only men can enjoy.

Something that I find to be really important when discussing feminism is that while it does focus on women’s rights, the basis of what it’s fighting for is gender equality. Not just for women but for everyone of all diverse gender identities and this wasn’t really mentioned in this book. Although I appreciate the inclusion of a bi character, having Cassie explain how sexuality is a spectrum and defending LGBTQ+ people, I think it would be a really important step to open up the conversation to people of other gender identities too, not just cis women.

I think there should also be something to be said about the many blatantly sexist actions and things described. There’s even multiple descriptions of sexual assaults and rape, and there was no trigger warning which is something I think is necessary.

This is a really small critique but in the brand new copy I was reading from my local library there were a lot of blank pages, like at the end of a chapter there would be an entire blank page which is just a waste of paper and really should not happen. I think this could be a printing error or only in my copy but it was very noticeably wasteful.

There were many good moments but I think that the main topics just needed to be outrightly explored a bit more, going more into intersectionality and other forms of discrimination would’ve also been a good step.