Eden and Bonnie are best friends, but when Bonnie disappears even Eden doesn’t know where she is. Will they stay friends even when torn apart by many hard decisions? How long will Eden trust Bonnie and lie to the police for her? 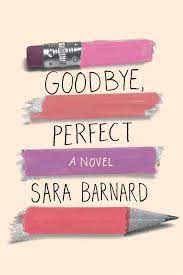 I give this book 4 stars (out of five). I really liked this book, I found it very entertaining and well written. All the characters were well developed and the plot was interesting and realistic. It’s about a teenage girl named Eden and her best friend Bonnie.

Eden and her younger sister Daisy were adopted at a young age and Eden is still kind of dealing with the effects. Bonnie is almost the exact opposite of Eden personality wise. While Eden is wild, talkative and adventurous; Bonnie is smart and school orientated, quiet and a rule follower. So, it’s quite a shock to Eden when she finds the police at her door telling her Bonnie’s run away and asking her where she thinks she’d go.

{Side note: I really loved the way they did introductions by just listing information about certain characters in Eden’s perceptive and how the text format switches throughout the book from normal, to showing text messages, news reports and with time switches/flashbacks.}

Bonnie has been seriously preparing for the exams for months and is really stressing out, Eden hasn’t really been studying; she’s not that type of student. But in the months leading up to her running away, she’s been vaguely talking about her secret boyfriend Jack and honestly Eden didn’t really believe her. She thought she was making him up or over exaggerating some fling, she could’ve never guessed the truth. Bonnie running away with Jack, but Jack turns out to be the music teacher at their school and a literal adult.

At 4am the day she ran away Bonnie texted Eden, just saying that she’s leaving but she’s fine and honestly Eden didn’t think too much of lying to the cops for Bonnie, for a while. But eventually as time goes by and Bonnie doesn’t make any sign of planning on coming home and seems to be more and more controlled by Jack or Mr. Cohn, Eden can’t sit back anymore. However, she can’t just tell the cops where they are, since she’s been lying to them and talking to Bonnie the entire time.

She actually wants to talk to and see Bonnie in real life and try to convince her to come home. (Spoilers in the rest of this paragraph) So she goes on an adventure of her own with her adoptive-older sister Valerie and her boyfriend Connor to find Bonnie and hopefully bring her home. After a long trip and a car ride full of important long avoided conversations Eden finds Bonnie and Mr. Cohn. After having the chance to talk to Bonnie and being unable to convince her to come home, she realizes her best friend is gone or at least forever changed. But to everyone’s surprise the cops burst in arrest and detain Mr. Cohn and Bonnie is brought home along with Eden, Valerie and Connor. After getting back home Bonnie and Eden never talked but months later the possibility of starting to be friends again seems real and although they’ve both changed a lot, they might just still be meant for each other.

Overall this book is really good and I really think if you give it a try you’ll fall in love with the characters and their quirks.