How It Ends By: Catherine Lo

Friendships are a balance, when you’re friends with someone you’re a team and you should work together. But that isn’t always what happens, as Jessie learns in this story. Constantly targeted by the mean girls at her school, Jessie is so relived when the new girl Annie stands up for her and they become best friends. But the mean girls want to be friends with Annie too, and they quickly turn her against Jessie.

Through twists and turns of friendship, love, betrayal and bullying Annie and Jessie learn more and more about the dark side of friendships. 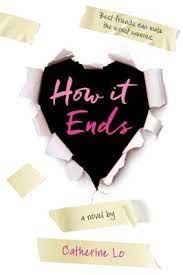 I give this book three stars (out of five). I really enjoyed reading this book; it has good character development and a great ending. The main characters are Jessie, a 15 year old girl with social anxiety and Annie, a girl who’s just moving into suburbia and who’s mom died. The perceptive switches between both of them, so you can know what both characters are thinking and feeling.

They meet on the first day of school and almost instantly become best friends. But there’s these mean girls who bully Jessie and at first Annie stands up to them, but then popular girls become friends with Annie and turn her on to their side.

Annie doesn’t know about Jessie’s anxiety so she thinks she’s just always overreacting and since Annie hasn’t told Jessie all about her mom, she’s mad because she isn’t getting sympathy for it? She also thinks Jessie is being paranoid about them not liking her and teasing her, even though they are making fun of her right in front of Annie and she’s not doing anything to stop them. In fact she even gets mad at Jessie for complaining about it.

[Slight spoiler warning, skip to the last paragraph to avoid them]

They start fighting and to try and stop the fight Jessie’s mom tells Annie about Jessie’s anxiety, and she immediately tells Courtney (one of the popular girls) and they ‘try’ to be nicer to Jessie. While they’re friends again, Annie realizes she’s pregnant and tells Jessie but Annie hasn’t told anyone and doesn’t know what she wants to do yet. Later, Courtney and Annie tell everyone about Jessie’s anxiety after Jessie (drunkenly) hits on her boyfriend Scott at Annie’s birthday party.

But after Annie tells the whole school Jessie’s biggest secret she still thinks she’s the victim because Jessie hit on her boyfriend on her birthday, she literally says “Jess is a bitch” and “worst birthday ever” when Jessie doesn’t reply to her texts. She is so focused on what happened to her, she can’t even see how much she unfairly hurt her best friend.

After the party, still sad and mad at Annie, Jessie texts Scott and tells him that Annie is keeping secrets from him. Later he confronts her and she tells him she’s pregnant. But this leads to everyone turning on her and hating on her, all over social media and at school people are calling her a slut and her boyfriend claims she got pregnant on purpose. Because of all the bullying Annie skips school for like a week and her stepmom forces her to get an abortion.

While Annie wasn’t at school Jessie started hanging out with some of her old friends and entered a new friends group. Eventually, Annie comes back to school. Everyone is bullying her, Courtney and Scott are dating now and they go over to Annie sitting by herself and start mocking her by kissing right in front of her, but Jessie runs over and stands up to them. This is the exact opposite situation from the beginning of the year, although Jessie got suspended for punching Courtney in the face, she still won back Annie’s friendship and now they’re best friends again in Jessie’s new friend group.

I sometimes found this book incredibly frustrating because at many points throughout the story Annie is really mean to Jessie and in the end they still end up friends. This is important though because Jessie standing up for Annie shows her character development, in the beginning she was too scared to even stand up for herself but now she has more confidence, power and the kindness to help others. Even though Annie was really mean to Jessie she understands that she still doesn’t deserve to be bullied for it. Honestly this book has some really mature things, it’s more than kind of messed up to make fun of someone who having anxiety (or any mental illness) or for getting pregnant at a young age or having an abortion.

Overall I really liked this book, the changes and parallels in the characters from the beginning and the ending are incredible.