How to Break a Boy By: Laurie Devore

Olivia Clayton has mastered the art of breaking others down to stay on top. With her best friend Adrienne, she rules her small town as the resident mean girl. But things start to get complicated after she suffers a family tragedy and catches Adrienne with her boyfriend. Olivia decides to make a change, but it’s not always that simple and she gets caught up in a battle between popular girls. Pulling Whit DuRant in it with her as she convinces him to be her fake boyfriend.

But as things with Whit start to feel real and Adrienne uses everything she can against Olivia, she is forced to fight back. She’s determined not to lose Whit and what’s left of herself. 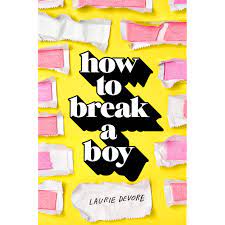 I give this book five stars (out of five). I really, really, really loved this book. It’s absolutely amazing, imagine Mean Girls but ten times better and as an amazing novel instead of a movie. Olivia Clayton is the stereotypical second in command mean girl, best friend’s with the main mean girl and second-most popular girl in school. Living in a small town has always been hard for her, after she lost her dad her family moved to try and get a new start. But Olivia and her brother, Ryan always hated it there and have always been trying to get away, their mom is still distant and trying to recover from the death of her husband.

In middle school Olivia meets a girl named Adrienne, and they quickly become friends. Although she’s already incredibly popular and controlling. In high school Olivia, Adrienne and another girl Claire are the most popular girls in school and they’re the kind of girls that’ll be nice to your face but will talk trash about you and spill all your secrets behind your back.

The story starts right after Ryan’s death and gives more and more depth and background information to Olivia and the other characters in flashback chapters.

Olivia is a really complicated character, she has two best friends, tons of other friends and a hot boyfriend named Ethan. But Ryan was the only person who she really loved and loved her back, most of her friends were faked or forced and her mom is always distant. After his death she blames herself, because before he committed suicide he called her but she missed his call because she was with Ethan and didn’t notice. Due to her grief Olivia changes, she isn’t the same, she can’t fake things as well. And her controlling best friend and boyfriend are the first people to turn on her, although Ethan did it because he felt Olivia didn’t love him anymore.

When Olivia walks in on Adrienne and Ethan sleeping together, it starts a full on war between Olivia and Adrienne. Olivia breaks up with Ethan and fights with Adrienne, she breaks into Adrienne’s locker and forwards incriminating screenshots of messages between Ethan and Adrienne to the whole cheer-leading team (Adrienne is the captain). However, in response to this Adrienne forwarded another conversation between her and Olivia from months ago that exposes Claire, who is a closeted lesbian and outs her in a small town is a terrible for her. Then she blames Olivia for forwarding them and blackmails her with that, threatening to tell Claire that she exposed her.

Later Olivia gets Whit Durant, the local smart and perfect boy to tutor her for the SATs and be her fake ‘boyfriend’ for a month during this war. But keep in mind this is all done in the way girls fight, with drama and rumors being spread as such, although Olivia tries to cut the crap with Adrienne and be completely straight forward, which is completely un-stereotypical for girls. You never acknowledge what someone’s doing behind your back, even if you know about it.

This entire time Olivia is having constant internal battles with herself, while fake dating Whit she actually falls for him but he doesn’t really like her back, he makes her a better person and so does she what she can with him. She acts a certain way with Whit but still lets Adrienne blackmail and control her at school, even when it means almost ruining Whit’s life. She struggles to change who she is, she separates herself from who she is with Whit and who she is when she does all this bad stuff.

Olivia lies and makes people believe Whit slept with a particular teacher who gave him private tutoring sessions. Whit loses nearly all his college offers and his reputation because of Olivia but he still trusts her right up until she tells him the truth. After that, Adrienne hacks the school paper making the cover story a picture of Claire and her secret girlfriend, while also breaking into Olivia’s locker and planting fake evidence.

Olivia gets kicked off the cheerleading team not just for the newspaper but for punching a guy who made fun of Claire. In retaliation Olivia ‘busted out Adrienne’s car window with my fake boyfriends golf club’. But at school Olivia has become public enemy number 1, everyone hates her for the things she did when she was really best friends with Adrienne but now they don’t have to pretend not to hate her and they go wild. Adrienne sets up something where her locker is filled with a particular type of alcohol that Ryan especially loved, he was an alcoholic and extremely depressed before he died. Then in addition to the drinks in her locker people everywhere in the hallway poured the stuff all over her, drenching her, burning her eyes and doing much, much more emotional damage. Olivia’s sobbing Ryan’s name when Ethan helps her, everyone else doesn’t because they know she wouldn’t help them and Whit wasn’t around.

On her way out of school Olivia kisses Ethan, who’s technically dating Adrienne but still loves and wants Olivia, he only cheated on her because he wanted attention and was trying to make her jealous. A few days later Olivia is sitting outside Claire’s house, waiting to be let in to tell her everything. They eventually make up and are best friends again. But the time is up for Olivia and Whit’s fake relationship though they ‘break-up’, spilling the tea that the relationship was fake along the way.

Giving up on Adrienne’s messed up game Olivia chooses to tell the truth to Whit and the people running the school, the whole truth about everything. At first they want to expel her considering her past, but the last few months were hard for her and with the counselor backing her up Olivia gets to do online courses and still graduate with her class.

A few months later as a low blow because Adrienne is a determined jerk who won’t give up, she sets up Whit with a girl who hates Olivia, then sends her videos of them together. In the end, Olivia aces her SATs, publicly confesses her love for Whit, has one final fight with Adrienne and gets her ‘happy ending’ with Whit.

A few things I want to comment on in this book is the very obvious lack of empathy that Adrienne has and the toxic friendships shown throughout the story. Adrienne sleeps with Oliva’s boyfriend for the only purpose of hurting her, she ruins two people’s lives in extreme ways by destroying Whit’s academic and personal reputation with rumours and by outing Claire which is not okay at all. And she also uses very personal trauma against Olivia by covering her in the alcohol her dead brother used to drink, which again is not okay and was probably extremely triggering and it’s even worse that she did that in the middle of school where everyone could see. Although Olivia is not the kindest or a perfect character, Adrienne is the type of character that I am still pissed off at even after I finish reading the story.

Overall I found this book surprisingly relatable (don’t ask) and many people, especially teenage girls will probably also find this relatable and funny although a bit extreme. This is also an emotional rollercoaster ride from start to finish so, be prepared to feel things. All in all, I absolutely loved this book and I recommend it to everyone and their dogs too.