(I was Dead for) 13 Minutes By: Sarah Pinborough

Natasha was found in the river, despite technically dying, she was saved and woke up again. But she can’t remember how she ended up there in the first place. Her best friends all start acting strangely and Natasha turns to Becca, her ex-friend, for help. In a world of betrayals and parties, it’s hard to know who’s your friend and who’s your enemy. 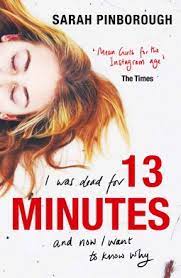 I give this book 3.5 stars (out of five). It’s well written, engaging and interesting. I’d describe this book as “Mean girls but with Instagram and Murder.” Throughout the story the perceptive switches between the two main characters; Becca and Natasha.

Natasha was found passed out and technically dead in a river during the winter. Except she can’t remember how she got there or why she left the house. That’s the beginning, I’m not going to explain everything and just summarize generally, so be aware of spoilers ahead.

Towards the end of the book it’s revealed that Natasha basically tricked everyone into thinking her best friends Jenny and Hayley ‘killed’ her. She planted fake evidence, used people and faked losing her memory. And Becca later realizes that the entire thing was rigged and faked by Natasha, knowing that Becca acts like she wants to help or be friends with her again. Then talks to her normally and records her when she admits to it all being her plan.

However, just as Becca is about to get away with a full confession voice recording Natasha notices Becca recording her and starts attacking her. As they fight for the phone they both fall in the river, they were originally going there to get rid of a laptop that had evidence that went against Natasha on it. In the end, I think Natasha dies while Becca survives. The ending is kind of abrupt and we don’t get a full explanation as to what happens next. It’s the type of ending where you have to guess and speculate about what happens. But I really like the ending because you don’t know if the confession tape was usable after falling into the river or if Natasha lives, so it leaves you with questions.

Anyway, I really liked this book overall. It reminds me of some ‘mean girl’ type movies that also include an element of violence or manipulation. The plot twists were done very well, even with the alternating point of views the reader is trying to piece together the mystery at the same time as Becca, so we’re also surprised with her.