If I Tell You the Truth By: Jasmin Kaur

This is a story of pain, trauma and triumph. Kiran and her daughter Sahaara are working to overcome all odds and have their happy ending, even if they won’t believe the truth. 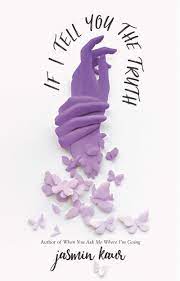 I give this book 4 stars (out of five).  This book is really good and I would definitely recommend it especially because it covers very important topics in informative ways by showcasing the main characters’ experiences.

I found this at my local public library, it immediately stood out to me because I live near the area this story takes place in. So I was able to understand some of the local terminology and this is set in Canada as opposed to many similar stories which take place in America, so it was even more real to me and spoke about things that happen here.

I found this book confusing because when I was reading it I didn’t realize it was fiction, it seemed like an entirely plausible story and I confused it with something else I was reading at the same time that was nonfiction. This led to me being very confused with some of the events that didn’t make sense if it was nonfiction, such as the story taking place in 2020 but not including the pandemic. When I finally realized that it was fiction it made a lot more sense, but because I was misinterpreting that my viewpoint might be a bit skewed. (It says it’s an imagined story and is categorized under fiction but I wasn’t paying a lot of attention, I read too many things at once so that’s how this mix up happened).

Another important thing to note is that this does include trigger warnings for sexual assault, rape, police brutality, immigrant trauma, victim-blaming, domestic violence, alcoholism, depression and anxiety.

This story is told through poems, illustrations and written sections. It also switches between Kiran and Sahaara’s perspectives at many different times.

This is the story of Kiran Kaur and her daughter Sahaara. Kiran is a first generation immigrant from Punjab to Canada, she had a student visa but had her daughter and decided to stay without proper documentation. Her story is complicated because before she left she was raped by her fiancé’s brother and her mother didn’t believe her and tried to force her into an abortion, mainly because of the damage it could do to her family’s reputation. To make matters worse no one in her family was willing to help her and the man who assaulted her (Hari Ahluwalia) was the police chief and is now a popular politician.

She decided to keep her daughter and has been raising Sahaara with help from her best friend Joti. Sahaara is now in high school and becoming her own person, but Kiran is still undocumented and they will only be able to sponsor her to get her on the path to becoming a permanent resident when Sahaara is eighteen and they can afford it. Kiran has carried the weight and trauma of what happened to her and never told anyone, in addition to dealing with the stress of fearing deportation and other challenges.

One day Kiran is arrested by CBSA officers and taken to be questioned, she explains her situation to them and they let her out. Then later with help from an organization called All Humans Are Legal she applies for her PR card and they have to wait to see if it’s accepted or not. Eventually Kiran tells Sahaara the truth about what happened and it entirely changes her perspective, especially on herself. Now all she can see in herself are the genetic similarities between her and her father.

After they find out Kiran’s PR card application was approved she agreed to do an interview to share her story, because the man who assaulted her is now running for chief minister of Punjab and she wants to stop other women from being hurt by him in the future. It was very brave of her but it wasn’t conducted in a respectful way, many people didn’t believe her and blamed her because he was a well liked politician. But Kiran’s story also started a movement in Punjab as women began to protest and speak out. Because of how widespread the story has become Kiran is invited by Woman Magazine to fly to Mumbai to be the guest of honour for their Women of Power gala.

Kiran doesn’t want to go at first but Sahaara convinces her to go, there they do a few interviews but make it look like they’re calling in from Canada. But it all comes crashing down when in a confrontation interview with Kiran and Hari Ahluwalia they realize that he is in the same building as them, even though they were both making it look like they were calling in from other places. It was unsafe for them there so they had to leave early and immediately flew back. Ultimately it got very messy for everyone involved.

They came home safely and life continues on but Hari Ahluwalia wins the election and Sahaara and Kiran are still working towards peace by the end of the book.

In my summary I skipped over many of the details and storylines that give this story its depth. I especially ignored Sahaara’s storyline and what was happening in her life from her failed relationship with Sunny, to her friendship turned possible relationship with Jeevan and even her tough decision to go to art school and follow her dreams even if it won’t pay well or lead to a solid position.

I also wanted to add the point that Kiran’s rapist was a police chief at the time he assaulted her, leaving her without any choice in reporting it or being able to feel safe there. And he was also a popular politician, these details make the story even more realistic as so many politicians, CEOs and people in other similar positions of power use it to hurt, abuse and exploit others. And the worst part is that they often get away with it and their supporters blame the victims. This terrible and toxic cycle as shown in ‘If I tell You the Truth’, mirrors the real world events that are embedded in the most important parts of our political and social systems.

Here I’m going to comment specifically about a few moments or lines that stood out to me as particularly meaningful or important.

On pg. 163 there is a poem entitled “All the reasons why I am enough” and it is only the numbers 1-5 listed out with no writing. This speaks volumes as to how the character feels about themselves in a very concise and clear way.

The poem “If I tell you the Truth” (pg. 235) addresses victim-blaming head on by asking if I told you the truth would you believe me? And would you still love me? Coming from a character and family that has been torn apart by people’s inability to believe Kiran’s real experience.

On pages 258-260 Sahaara starts to write a letter to her mom that she never intends to send, just so she can say more of what she’s thinking and get it off her chest. Kiran finding this letter is a very influential and important moment for her, this is why it really stood out to me in the way it changed Kiran’s mind and helped her understand Sahaara’s feelings too. The messages within the letter are also very meaningful outside of the context of the story.

And finally the poem Helpless (pg. 272) has another powerful message, it speaks for Sahaara wanting to erase the hurt and trauma her mother experienced even if it means she would no longer exist.

Overall I liked this book. It’s very sad and includes stories and characters that encompass many different issues and topics so I think it’s a very good read. And as a Canadian it was even more influential to me because it takes place in my own country so I have to face the reality of the immigration process and other bad things that still happen here no matter how we compare to other countries. I would definitely recommend reading this especially for Canadians and Americans because it covers so many important modern social justice issues.