In the Age of Love and Chocolate By: Gabrielle Zevin (Birthright Trilogy #3)

In this beautifully written conclusion to the Birthright trilogy, Anya Balanchine must make difficult decisions to fight for her own livelihood. Even if it means working with one of her lone term enemies and losing someone closest to her. Now eighteen, Anya decides to open a nightclub and after lots of hard work and persevering it is a big success. But Anya still has to fight for her life and learn what love really means. 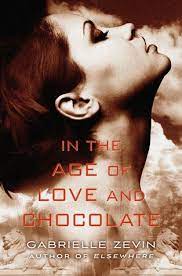 I give this book three stars (out of five). I really enjoyed reading this book, it’s well written and a great conclusion to the Birthright trilogy as a whole. So, since this is the final book in this series I can’t really get into the plot. It wouldn’t make that much sense and there’d be way too many spoilers.

However I will very briefly cover some things that happen in this book, so if you don’t want spoilers please skip to the last paragraph of this review.

Since so many things happen in this book I’m only covering the main plot points that stood out to me. Anya Balanchine starts her own business, her own nightclub chain called ‘The Dark Room’. It’s a big success, the Balanchine family is also moving toward legal work cacao selling, instead of selling illegal chocolate bars. Anya Balanchine’s successful business is gradually growing, more locations being added all over America (this takes place over a few years). Eventually as a business decision Anya gets married to a man named “Yuri Ono”. He’s the leader of another powerful mafia family. He’s dying and he wants Anya to take over. So they get married, but soon after he dies and she keeps running the business (Anya and Yuri opened cafes like The Dark Room called The Light Bar).

However, shortly after Yuri’s death Anya is attacked by the woman who loved Yuri and the one who killed him (I can’t really explain this character too much without telling you many other details so bear with me). Anya fights back and she kills her, but Anya is seriously injured and has to spend a long time recovering. After that the plot is mainly centered around the romance between Anya and her ex-boyfriend Win. It’s kind of complicated but a great ending to the trilogy.

Something that really impressed me was how the author wrote time passing. In the span of one or two chapters years can pass and it wouldn’t feel rushed, too slow or awkward at all. In many books in which the plot takes place over a long span of time, time skips are used more as a plot device instead of just part of the story they’re telling. It’s really difficult to show time passing in easy to understand ways that flow well and make sense.

Gabrielle Zevin also does this greatly in her other books Elsewhere and the first two books in the Birthright trilogy. Another thing that is consistently really good with Gabrielle Zevin’s books is her description of things, she’s excellent at writing really in depth descriptions of any situation. Overall I really enjoyed reading this book and the rest of the series. I was drawn in by it’s great story and amazing characters.