Jacked Up By: Erica Sage

This book mainly follows Nick as he goes through the many struggles of being a more typical teenager stuck in a highly Christian summer camp, while also being haunted by the ghost of author Jack Kerouac. He is important to the plot, but I’m still not entirely sure why he’s there. Anyways, this really focuses on character development and self discovery throughout the story. 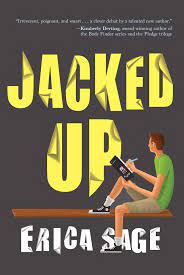 I give this book 5 stars (out of five). I love this book, it’s amazingly unique and has the most creative plot I think I’ve ever read (and I’ve read a lot of books, specifically teen books and this is one of the best). I love the crazy, wacky story that somehow also has real meaning and deep characters. I also love the fact that there’s randomly the ghost of a long dead author that just kind of constantly follows and bothers the main character? It’s so out of place but it also totally works.

Nick is a teenager, currently grieving his sister, Diana and unbelievably mad at his parents for sending him to the same stupid summer camp that converted his other older sister Charlotte to be strongly Christian and homophobic. This was a big problem since Diana was a lesbian, in fact it basically tore their family apart. Nick would be totally alone if it weren’t for Jack Kerouac not leaving him alone, he can only hope the camp isn’t too bad and Jack doesn’t follow him there. But unfortunately for him both of those hopes went unfulfilled.

The camp is weird, like really, really weird. And I’m talking straight up strict, painful Bible reenactments, extreme Christian rap and a passive aggressive confession box. And honestly Nick has no idea what’s going on, especially since on the very first day everyone freaks out at him for having a Harry Potter towel, because witchcraft or whatever. The rest of the story is Nick struggling his way through camp and it’s activities, Natalie’s (the mysterious girl Nick’s falling for) tragic story, a stolen confessions box and an amazing Jack Kerouac.

I would say more about the plot but it’s such a good book I don’t wanna ruin it or reveal too much of it since being surprised while reading it was my favourite part. It’s an incredibly good book and I totally 100% recommend it. It’s nearly a perfect teen novel in my opinion, although it might not always be completely relatable and is pretty sad, it makes up for it by being funny and real enough to be one of my favourite books.