In this thrilling continuation of the Ash Princess story Theo continues to fight for her freedom, her life and for Astrea even if that means having to marry (something no Astrean Queen has done before). With help from her friends and ally Dragonsbane Theo starts looking for the right allies but soon finds that everyone has ulterior motives. 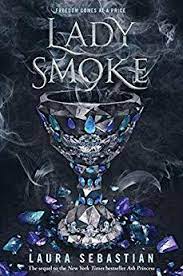 I give this book 2.5 stars (out of five).  I enjoyed reading this book but it didn’t quite live up to my expectations because I really loved the first book Ash Princess. This book was significantly slower paced, there were many good reveals and twists throughout the story but they only nearly make up for all of Theo’s questionable decisions.

This is a very minimal summary but in this book Theo and her allies and friends journey to a different country to try and secure an alliance through marriage (suitors will meet them there), so that they will have enough tropes to fight the Kalovaxians. This doesn’t go well because there are multiple attempts on Theo and others’ lives while they’re there and this leads to Søren being imprisoned and blamed because of his race. Theo is later targeted directly by one of the suitor’s sisters but she was able to fight back before she was seriously hurt.

After that the Astrean forces try to get out of there as quickly as possible, they break Søren out and later go to the Astrean (and people of other races and cultures who were overrun by the Kalovaxians) refugee camp and liberate them. They take everyone with them and steal ships so that they can leave safely, they take anyone who can and is willing to fight with them while getting everyone else to safety.

[Spoiler Warning, skip to the last two paragraphs to avoid them.]

Ignoring a few other details, the book ends with a battle in which the Astrean forces ambush and take the Air Mine in a very dramatic and devastating battle. This marks the first battle in the upcoming rebellion of Astrea to the Kalovaxians, and the Astreans win although they also suffer many losses.

In the end, Cress is there and she now has extremely strong fire powers as a result of the Entracio poison Theo gave her in the first book. When in a negotiation room alone with the Kaiser, Theo and Søren, Cress kills the Kaiser and gives Theo a terrible choice. She either drinks the Entraicio poison that Cress gave her or she’ll immediately kill all the Astreans there. This is also something personal because Cress is trying to kill her in the exact same way that Theo did to her, Theo agrees and drinks the poison. Cress leaves and takes Søren captive with her, believing Theo to be dead but she was actually saved by Artemisia’s water powers.

Not long after Theo wakes up she insists on going into the mine so her power can grow to the same extent as Cress’s and she can later fight against her. The book ends with Theo entering the Mine even though everyone told her not to. This directly impacts the rest of the story and Theo’s relationships, specifically with Blaise.

The love triangle between Theo, Blaise and Søren was kind of painful. Not just because I personally disliked it and think it’s more than a little bit of a cliche but also because it feels out of place with the rest of the story. I can’t be as invested in their romantic relationships as I otherwise would be if there wasn’t an entire war going on in the background.

This book got rid of the Kaiser, the main antagonist and instead replaced him with Cress, because she has a much closer relationship with Theo and makes the rest of the war a lot more interesting and personal.

I really like that there were realistic language barriers in which some characters sometimes didn’t know what was going on because they couldn’t fully understand the language. And the realistic portrayal of war and the poverty it brings, they don’t just ignore the many displaced people and refugees caused by the war and they actually include them as a major plot point.

This was interesting but overall noticeably worse than the first book and I’m mainly still reading just to finish the series. I probably wouldn’t just read the next book for the fun of it if I wasn’t going to write about it.