Leap of Faith By: Jamie Blair

‘Leap of Faith’ is the story of Faith literally taking the risk of a lifetime. When she sees the opportunity to stop another baby from growing up like she did, she takes it. Kidnapping the child and running away to try and give Addy a better life. She finds kind people who are willing to help who they think is a teen mom, but Faith’s guilt is catching up with her and she can’t live a lie forever.

Trigger warning for child abuse, drug use, prostitution and other mature topics. 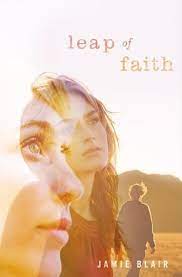 I give this book 3.5 stars (out of five). I really liked this book, but it’s very sad and potentially triggering. There’s not only mentions of child abuse, drug use and all the things teen moms go through, but it’s the main storyline. Faith (Leah) Kurtz is a sixteen year old girl living in a terrible household, her mom is abusive and emotionally unstable. She uses drugs regularly and prostitutes herself for money, Faith and her older sister Hope are left to take care of themselves and each other. But Hope is almost never around anymore and Faith is left to fend for himself.

The first major thing that happens is their mom having, carrying and selling someone else’s baby for another couple. But Faith does her own investigation on the couple and realizes that giving them a baby is just setting up that kid for a terrible life, the kind of childhood she had. Growing up with passed out parents and surrounded by abuse, she wanted better for that kid. So she made a plan to go with her mom to the hospital and take the baby and run away, go somewhere they’ll never find her, take all the money she can get and her car to try and make a life for her and the child away from her hometown, her mom and the other couple.

Faith follows through buying baby’s stuff and stealing her away, she names the baby Addy. She gets far enough away to feel safe and starts trying to find a place to stay. But hotels and motels aren’t exactly fond of new born babies. Faith ends up in a restaurant and laundromat where the owners are very nice and sympathetic to who they assume is a very young teen mom. Faith lies about her age, says she’s 18 and the baby’s her, she implies that she ran away from an abusive boyfriend and she changes her name to Leah (her middle name). Through coincidence and some dumb luck, she finds a really cheap place to rent with a very attractive young guy named Chris, who happens to love babies, and his dad. Chris also has an aunt who owns that restaurant and gives Leah a job.

Leah has made a life for herself living with Chris and spending time with his family, taking care of Addy and working a new job. Chris and Leah have something of a romance with Addy in the center of it. Her life’s pretty good at least for the time being, but the guilt of lying to everyone and leaving her old life behind is still getting to her.

And although her motives don’t really make sense she tricks Chris into taking her home, but when she gets there she doesn’t find what she expected. She leaves behind a notebook telling Chris the truth about who she is and how she really thinks and feels, and goes to find her family.

But when she gets there her mom doesn’t care anymore, she’s already moved on to her next money scheme and her sister is embarrassed by her and has moved on as well. Faith realizes that in the end going back home was unnecessary and now she can’t go back to where she was because she lied to them and it’s coming back to bite her. And now she’s back stuck in another motel and can’t take care of Addy by herself.

She puts an ad online, looking for potential adoptive parents and she finds a good couple. With a good house, who’ll take care of Addy and love her like their own. But right as Faith is leaving the motel to give Addy to her “new parents” someone knocks on her door and it’s Chris. It’s a cliffhanger ending but I think there might be a sequel in the making.

Overall I really, really liked this book, it’s real and shows the conflicting feelings of Faith/Leah and why she lies. Although this book deals with heavy topics and themes I think it handles them well and tells something that could be a real story (without the plot convenient luck).