Lone Wolf By: Kathryn Lasky (The Wolves of the Beyond #1)

Faolan was abandoned by his pack and left to die. But he was not entirely alone, while stuck in a river he bumped into a grizzly bear. She was a mother herself and lost her only cub, seeing Faolan she knew it was fate and that she was meant to raise him. But life isn’t always fun and games and Faolan’s story has only just begun. 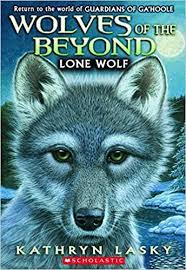 I give this book 3.5 (out of five). I’ve read this book multiple times and I personally found it sort of underwhelming. It’s definitely good and clearly well written but I was expecting, I think this might be because it’s the first book in a series and spends a lot of time world building and setting up stuff. This story is centered around the Wolves of the Beyond, the main character is a wolf pup named Faolan who was taken away from his mother at only a day old. The rule in wolf packs is that any deformed or defective pups, referred to as Malcadhs, are to be carried away and left to die by a certain she-wolf called the Obea. If one of these Malcadhs survies they can rejoin the clan as the lowest ranking members, called Gnaw Wolves.

Faolan is one of those pups because of a splayed-paw with a spiral design, it was viewed as a weakness and a bad omen. The Obea put Faolan on a thawing river so that he would drown, but as the river thawed and flowed, Faolan happened to grab hold of a grizzly bear’s leg. This grizzly bear was also a mother but her only and last cub had been taken by a cougar.

When she saw Faolan she knew she was meant to raise him, it was a sign and she named him Faolan, ‘Fao’ meaning river and wolf and ‘lan’ meaning gift. This bear is called Thunderheart by Faolan because of her loud heartbeats, she raises and teaches Faolan as if he was her own cub. It’s hard sometimes since Faolan is different and Thunderheart has never raised a wolf but they get along great and Faolan is learning fast. Thunderheart specifically made Faolan use his splayed or weaker paw, until it was no longer a weakness and was just as strong as his other paws.

Eventually the seasons started to change and Thunderheart would need to find a winter den where she can hibernate. She has to prepare Faolan for her being asleep and gives him permission to leave the den and hunt. Faolan loved winter and snow and he often roamed pretty far from the den when he went out hunting. One day when he was out hunting there was a terrible blizzard. During the storm Thunderheart had woken up from her great sleep even though it was still winter, when she woke up she was frantic and confused. Faolan wasn’t in the den and she didn’t remember giving him permission to leave the den, so she left the den to find him but she was almost immediately lost in the snow.

When Faolan returned to the den he found it empty, he had no idea where Thunderheart was. Faolan waited for Thunderheart for a long time but she didn’t come back and then the earth seemed to move uncontrollably, it was an earthquake! During the earthquake Thunderheart was struck by a huge boulder from the ridge above, it had broken her back and she was dead.

Faolan was overcome with grief, he didn’t know where Thunderheart was but he knew she wouldn’t intentionally leave him. Incredibly lonely, Faolan decided to go to the Outermost, a place Thunderheart had talked about going after winter. When Faolan did reached The Outermost he found it was a decent hunting ground but was also filled with corrupt wolves who cannibalised each other and killed other animals slowly and for sport, Faolan was repulsed by these wolves and knew he couldn’t stay there.

While Faolan was making his way back to the Beyond he stumbled upon a cave, but not a normal cave. This cave had the presence of many animals but proof of inhabitants, the walls were covered with extremely realistic paintings and images. Including the exact design on Faolan’s paw and pictures of wolves and many other creatures, the paintings told a story, showed history and Faolan was entranced by them. Faolan spent a good amount of time in the Cave Before Time, trying to understand what the paintings all meant. Eventually Faolan left the cave, now understanding wolve clans, packs and how they work together to hunt.

Faolan continued his journey back to the Beyond, he found Thunderheart’s skull, Faolan understood and did not grief her death but appreciated her life and howled for her spirit. While Faolan was howling he was overheard by a smith owl living nearby named Gwynneth (I’m not going to fully explain the Owls here but they have a close relationship with wolves). She listens to Faolan and flies down to where he is, having overheard him she wanted to talk to him. Gwynneth knows all about the Wolves of the Beyond and how the clans and packs work, she explains the Obeas and Gnaw Wolves to Faolan and encourages him to join one of the packs in the area even though it will be hard for him. Eventually Faoln had to leave, he stayed in the area and watched the wolves living there and how they hunted and behaved. He was not eager to rush into anything before he fully understood wolves and how packs worked. He watched Gnaw Wolves be treated badly, so he didn’t want to join a pack only to be treated cruelly.

However, when the wolves of one pack made a presage (almost like a prophecy or story) about Faolan, a wolf who did not die, this got the attention of the chief of that Clan. They saw a few of Faolan’s tracks and could smell him. Upon seeing Faolan’s prints and the design on his tracks they conclude that he has the foaming-mouth disease and probably got it from a bear. The foaming-mouth disease can easily be spread so the Clan leaders meet and arrange to track and kill this wolf so more wolves don’t get sick.

[Major spoiler warning, skip the next paragraph to avoid them.]

Faolan could sense the wolves following and chasing him, he realized he was the prey and was strategizing to get away. But Faolan was chased into a wall of fire designed to kill him but he managed to jump over it and survived. The Clan leaders and wolves that were chasing him realized their mistake and let Faolan rejoin his birth-clan.

Overall I did really enjoy reading this book, especially the first time I read it. It’s just really sad,the majority of events are sad and nothing really balances it out. First Faolan is abandoned and left to die, then he’s saved but Thunderheart dies and he’s really lonely. Then he is hunted by a group of other wolves, even in the end he is treated as a Gnaw Wolf and going into the next book it is clear that treatment won’t change at least for a while.

That’s my only complaint, it was just sad and there were hardly any other components that contradicted that. I understand some stories are like that and still compelling but this book has more of an emotional focus then a plot focus, at least in my opinion. But I still really liked the world building of Beyond and Faolan’s character.

This is the first book in a series with five other books, this also takes place in a universe that is connected to multiple other book series including Bears of the Ice and Guardians of Ga’Hoole. You will be able to find reviews of a few of these others books on my site but I currently have not read all of them yet.