Look Past By: Eric Devine

‘Look Past’ is a terrifying murder mystery story in which Avery is targeted by a highly religious killer for being transgender. After Mary Mathison disappears and her body is found in the woods, Avery starts getting horrible threatening messages. Telling him that he’s next and his identity is a sin. Avery has to try and stop the killer and solve the mystery before time runs out. But will he be able to solve it when even the police can’t? 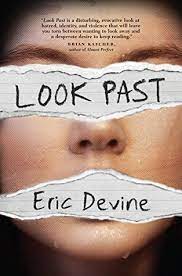 I give this book 3.5 stars (out of five). I really liked this book, it was chilling and scary but also has great characters and emotional heartfelt parts. Lock Past is the tragic story of killers who target and torment a young transgender teen just for being different and not what they think is right.

Mary Mathison has been brutally murdered, but of course Avery (the boy who loved her) doesn’t know that yet. Avery has always gotten bullied and stuff for being transgender, in fact it’s an everyday thing that he’s almost somewhat used to by now. What he isn’t used to is people punishing someone for loving him. Mary and Avery had been friends for years, but after getting caught together by her reverend father they just weren’t as close publicly or at all.

Being with Avery got her into trouble and she just couldn’t stay with him in their small town but despite not being together they still loved each other. Mary’s disappearance and later confirmed death shook Avery to his core and he couldn’t shake the feeling that her death was his fault. After Mary’s funeral Avery receives a series of threatening text messages that could only come from the killer. Avery, his girlfriend Beth and best friend Charlie are set out on solving the crime before the killer comes back for Avery.

The rest of this heartbreaking murder mystery follows Avery as he not only figures out who the killer is but nearly dies in the process of stopping them (while also dealing with constantly escalating threats and ever present danger). It’s really a thrilling story and although I don’t want to reveal any more of the plot, it’s amazing and worth reading. If you like chilling horror books or murder mysteries this is definitely the book for you! There’s also another element in this book, because Avery is specifically targeted for being transgender, which just makes you want the killer to be caught even more and it’s a bit different from just your average mystery story.