Lord of the Flies By: William Golding 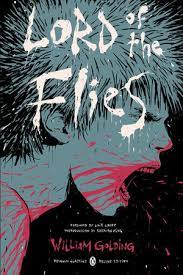 I give this book 3 stars (out of five).  As this is a classic story I’m not going too in depth with a plot summary as most people probably already have an idea of the story and summaries are very easy to find, but I really wanted to review this in my own way and words. Lots of people forget about new generations of people reading classic literature, and I think that young people’s views on older literature can be very valuable because it shows how the present can compare to things created in the past.

There are some spoilers in this review but assuming most people have already read this there are no warnings, so read at your own risk.

The version of Lord of the Flies that I read was different from the original because it also included a foreword, introduction and conclusion by other authors. I initially really liked this because as a younger person reading this for the first time, having some guidance and knowledge of the story was pretty helpful. However, I think the Foreword and Introduction didn’t make it easy for a first time reader. I understand that most people would’ve been rereading it, but there’s always going to be new generations of people who haven’t read many things considered classics.

I didn’t like that there were some spoilers before the actual story, because I feel like that impacted my thoughts and interpretation when I started reading and what I expected. I wanted to go into it not knowing very much, all I knew was that it was about young boys without supervision and has been widely studied. I wanted to be able to experience it with very limited knowledge at first so it was kind of frustrating that I accidentally ruined that for myself, but it didn’t entirely ruin the book for me.

I think I was definitely a bit too young for this book. I know that lots of students around my age (at least in America) read this book around the same time but as I wasn’t reading this for a class I think my experience was different. I know that since this was originally published in 1951 there’s obviously a huge cultural and language difference, for example the word ‘Creeper’ was used quite a lot and everytime the only thing I could think of at first was Minecraft Creepers and I just think that’s kind of funny.

I read that many people originally identified with Ralph, which I found interesting. I think for most people when they read they have one character who they identify with most, but I didn’t really find one of those in this story. If I had to choose one character that I identified with it probably would’ve been Simon, but I found a lot of the choices and decisions made by the characters confusing.

Reading the conclusion was very helpful to me, I think that if I didn’t read it I probably wouldn’t have had any idea what the general interpretation was, because for me I mainly read for the story but in this case the story wasn’t extremely extraordinary by itself and to have a full understanding you needed to look deeper than I normally would.

It explained that the characters are often interpreted to represent different human traits and you can see it in the way that all the major characters are set apart, but I don’t think that any one character really stays within their decided characteristic. Even when Piggy and Ralph were supposed to show reason, logic and leadership they still either joined into some of the mob mentally that led to Simon’s death or didn’t do anything to stop them, so they clearly didn’t always stay true to their main traits.

I don’t think any character should be defined by one main trait, even if that’s what they’re supposed to represent in the story because their actions all show multiple traits of humankind.

I think this gives the story and characters more levels because even Jack who represents sadism and rage has moments where he is scared or hesitant.

I did like the story but it was a bit lost on me. I did like the characters and I often felt very bad for Piggy, but I didn’t understand lots of the things the boys did. I also didn’t understand why people would’ve identified most with Ralph because he was the leader who tried to obtain some form of order, but it was easily lost to the other boys and their natural lack of order without adults to supervise them or enforce rules.

I liked the detail that the twins SamnEric were combined into one name and often referred to as one person, as they basically always had to do things together to be fully functional.

I think the entire concept of the beast or monster on the island is easily explained, the boys were sacred, alone without any adults and paranoid. It makes a lot of sense that they would have nightmares or get easily scared. I also think that in the scene with Simon he was just hallucinating due to dehydration and the boys on the island were the only real monsters.

I was extremely surprised when the boys were rescued, because that was not the ending that I expected at all. I really thought Ralph would die in the end or when the entire island would be made nearly uninhabitable by the fire. It seems so frustrating that the thing that Ralph was trying so hard to maintain, the fire, was what got them recused but it was for an entirely different reason.

Overall I don’t think I truly understood the story because I didn’t think this story was anything groundbreaking or anything, I can see why it would’ve become a classic and probably would’ve been shocking in the time it first came out. But nowadays the amount of violence is way less compared to things published in the 21s century that are less renowned. This is why at first I was a bit confused as to how this is still regarded as some of the most shocking fiction because there’s definitely many thrillers for both teens and adults that are more graphic.

I honestly only read this because I wanted to know what it was, I’d seen this talked about as a very important piece to read during your life. So naturally I wanted to read it and understand what people were talking about, personally I didn’t find it to be extraordinary but I also know that my opinion might’ve been different if I had read it for a class or taken a bit more time to look at it in depth.