Racheal has no idea what happened to herself. She woke up by the side of the road, but she couldn’t remember anything that had happened in the past year. She can hardly recognize her own life, let only put enough pieces to figure out what happened. Many other girls have also gone missing, but Racheal has been the only one to come back. She can’t remember who kidnapped her, but Rachel will do everything she can to stop them even if it means putting herself back in danger. 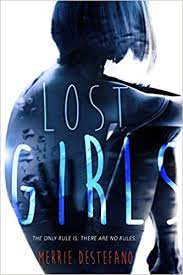 I give this book 3.5 stars (out of five). I really liked this book, it’s very well written and I think the character development was great! I also love the concept; a teenage girl gets kidnapped but loses her memory for the past year and then she has to piece together who she was and who she became.

This really reminded me of a book I read a few months away with a similar plot that was also really good, Memoirs of a Teenage Amnesiac By: Gabrielle Zevin (which I also have a review of) except in this one she actually has to solve a crime and she gets her memory back in pieces instead of all at once.

Racheal, a high school sophomore, goes to sleep one night and wakes up a year later in a ditch by the side of the road. She stops traffic for help and ends up at the police station being interrogated, apparently many other girls have been kidnapped but she’s the only one who came back. She goes home with her family but soon discovers she’s missed an entire year of her life and she no longer knows who she is. She has new friends, new hobbies, new hair and went from struggling in almost every class to straight A’s in AP classes. She has to try and piece together who she is, what she’s been doing for the past year, while slowly getting her memories back one by one. Not only does she have to figure out her own normal life but she has to uncover what happened to her and how.

[Spoiler warning, to avoid spoilers skip the next paragraph]

In the end she does just that. In an incredible finale battle Racheal fights for her life once again against her kidnappers, but this time she wins and she remembers who she is.

Overall, I really loved this book, it’s amazing. I totally recommend it but just a disclaimer there’s drug use, sex, raves and many more potentially triggering and mature topics. Please keep that in mind before you decide to read.