Made of Stars By: Kelley York

We are all made of stars, but what happens when a star burns out? The light we see from Earth is thousands of years old, who’s to say people can’t burn out either? Hunter and Ashlin are back at their father’s place for the summer, and their friend Chance is happy to see them. But when his secrets catch up to him, Chance has to choose whether to stay with the people who love him or disappear forever. Even the stars are lies. 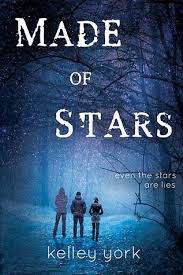 I give this book 4.5 stars (out of five). I really love the story! It was very good and definitely worth reading. This story is told from the perspective of Hunter, Ashlin and Chance. Hunter and Ashlin are half-siblings who used to spend every summer with their father, but they missed one year, so this is the first time they’re there in a while.

While they are there they meet up with their friend Chance, who they’ve known since they were all kids. But something is different this time, Hunter brings his girlfriend around for Christmas and something is wrong with Chance. It’s not just the sparks that fly between Chance and Hunter, it’s also a story of abuse.

[Spoiler warning skip to the last two paragraphs to avoid them]

Eventually, Hunter breaks up with his girlfriend and starts to unapologetically love Chance. But at the same time Chance is avoiding his abusive father, who might have killed his mom. In the end, Hunter found Chance after he disappeared and got him to the hospital. Despite having minor hypothermia, Chance gathers his things and sneaks out of the hospital. He runs away again, this time even from Hunter and Ashlin. He disappears down the highway and into the night.

My Opinions and Comments (with spoilers):

The way the title ties into the story are the many scenes, parts of dialogue and details about stars in the book. As well as how Chance thinks about people, since we are all made of stars he figures that because the stars are so far away it takes a long time for the light from them to get to us. Applying this logic to people, some of us may have already burned out but we just don’t know it yet.

My favourite character is Chance, I love how mysterious he is. Although it saddens me that he never asked for help (even when he really needed it) and that he almost dies, I think he still makes the best decisions he can for himself. For example, the ending he leaves the one person he ever really loved because he thought it was best for everyone, which is a really big sacrifice. There’s also the fact that he nearly lies more than he tells the truth, which adds another layer to his character since even to readers it’s hard to determine what he really means sometimes.

Even though the ending is really sad and abrupt I still love it, and I think it’s the only ending that would make sense. Chance running away in search of the freedom he’s needed all along. The relationship between Hunter and Chance was so real that in the ending when Chance throws his phone, it is so sad. He’s almost literally throwing away his connection to Hunter, even when he didn’t really want to.

And I can only guess what Hunter and Ashlin do next, do they continue trying to find him or do they give up and go to colleges like Chance hoped? The only thing I know for sure is that Hunter will be completely heartbroken once he knows that Chance is gone and he’ll probably never see him again. But even though Chance is gone, Chance is free and I think eventually Hunter will realize that and stop trying to find him, even if he still loves him. Their love story is rough, but even if it ended sadly it is still an amazing story.

I love how the whole story focuses around Chance and Hunter and the stars, it makes the book so interesting. Throughout the story there are some predictable plot points, but that’s just because everything makes sense with each character’s motivations.

And beyond the story I really loved that the author included sneak peaks of her other books in the book after the story was over. I think it’s a really cool concept and now I want to read more of her books. I also really loved the switching point of views between the different characters for the different chapters, it made it a lot easier to tell how each character was feeling or thinking. Anyway, I really recommend this book to anyone who enjoys a good romantic thriller.