Memoirs of a Teenage Amnesiac By: Gabrielle Zevin

After falling down the stairs teenager Naomi Porter hits her head and loses her memory. She can’t remember anything that happened in the past four years, and she has to piece together who she was and try to relearn everything. She doesn’t even know who her boyfriend is, or who she used to like. It’s hard to be yourself when you can’t remember who you were. 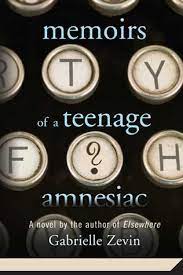 I give this book 4 stars (out of five). The only reason I don’t give this book a five is because I personally don’t like some of the really important decisions the main character made. I always find that really annoying, when a character in a book makes a bad decision or does the opposite of what you would’ve done. And there’s nothing you can do but keep reading and see what happens next.

Besides that I loved almost everything about this book, all the characters were well written and their relationships were so developed that they basically seem like real people (to me). I read this book in less than two days, so I guess I can say it has a great hook. I also really love the irony of this book, the beginning of the book starts with Naomi Porter telling us how much she hates orphan stories and then she proceeds to tell one. The story is from her perspective and follows her as she gets into an accident and forgets everything that happened in the past four years. Then she has to keep going and try to figure out who she was. First of all, I really like the concept of having to kind of guess about who you were and piecing it together, it makes you question if you’d still be the same person or if you’d be completely different.

Naomi Porter is the co-editor of her school’s yearbook, she’s a tennis player and has a boyfriend named Ace and her best friend is co-editor Will. But she can’t remember them, after she fell down a flight of stairs and hit her head. She can only remember up to the year 2000 which in the book was four years ago. She can remember math and science but not French. She can’t drive and she didn’t remember that her (adoptive) parents are divorced and she has a sister now. It’s hard for her, she doesn’t know who anyone is or where to go.

She has to relearn so much about who she is and why she liked the things she had liked. She meets this boy named James during the ambulance ride to the hospital. He lied and said that he was her boyfriend so that she didn’t have to go alone. Obviously she couldn’t remember if he was her boyfriend or not or if she even had one. After a few weeks of staying home (and mainly sleeping) she returned to school. She was experiencing some side effects from her head trauma like light sensitivity (she had to wear sunglasses) and temperature differences (she was always cold even when it was warm). She had to be told which classes she had and be reintroduced to all her teachers and classmates.

A lot of things happen in the next few months but I don’t want to spoil or explain too much. So I won’t go into detail about most things. But I want to cover one of the major plot points that is kind of a plot twist. It’s more just really unexpected so if you don’t want spoilers, stop reading now.

Ok, so I’m not going into detail about the events that lead up to this, but Naomi gets her memory back. She was practicing French with her boyfriend (at the time not going to explain this) James when she randomly remembered French words without thinking. And then she remembers everything. She remembers French and how to drive. She even remembers that instead of slipping down the stairs, she dove to catch an expensive camera. But instead of telling everyone like you’d think she would, she doesn’t tell anyone. She keeps playing along and pretends she can’t remember stuff. Eventually though she does have to tell people and that’s nearly the end of the story.

Another really interesting thing about this book is that the author (Gabrielle Zevin) herself wrote that all different art forms are really important in Naomi’s life. In fact different characters represent different art forms, Will (her best friend) is music, James (her sort of boyfriend) is movies, her mother is photography and her dad is writing. You can totally see that in the story, the different character’s relationships with Naomi are really based on those things. In fact, the music was such a component of the story that Gabrielle Zevin even included a list of songs that were referenced after the end of the book (which is very helpful if you’ve never heard of the main character’s favourite song and so on).

I also want to say how good of a job Gabrielle Zevin did writing this book. The character development with Naomi is so well done and thought out, it seems like every single detail was written with an extremely important purpose. I really loved reading this book and recommend it to anyone who wants to read an amazing book.