What is the most common type of monster? In this story, it’s people. Vic Howard didn’t even want to go to the party, but after that night many lives were changed forever. Callie Wheeler was raped, and everyone thinks Vic did it. How can he prove he’s innocent when everyone and everything is against him? With interesting characters and twists at every turn, ‘Modern Monsters’ will leave you shocked. 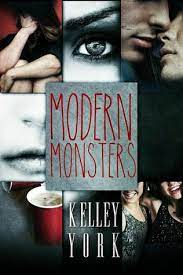 I give this book three stars (out of five). I thoroughly enjoyed reading this and think it is really well written. So without spoilers, the story is about a high school student who attends a typical party but gets accused of rape afterward and then has to clear his name. Vic Howard is your average senior, he’s quiet, has a slight stutter and only really has one friend, named Brett Mason.

At one party he helps a drunk girl upstairs and to a bedroom, then leaves to try and her friends to make sure someone knows where she is. But after he leaves someone rapes her and she can only remember him being there. He also got blamed because of his stutter and slight anger issues, which made even his own mother think he did it. The rest of the story is about how he tries to clear his name by finding out who really did it. Throughout he makes unlikely friends with the victim Callie Wheeler and her best friend, Autumn Dixon.

[Major spoiler warning, to avoid them skip to the last two paragraphs]

So, the main plot twist is that the guy who raped Callie is actually Vic’s best friend Brett. He was really drunk and he admitted that he didn’t mean to do it and that he messed up. But afterward he didn’t turn himself in and let his best friend take all the blame, he even planted evidence (like pictures of Callie) on other people at the party to try and throw the blame off himself. He wouldn’t own up to his mistake because he was supposed to go to Harvard and didn’t want to lose something he worked so hard for.

I think this plot twist is really good, it was very shocking and I did not see it coming at all. I couldn’t believe he’d just let Vic take all the consequences of his actions, especially since they’re such close friends and he knew what he did was wrong.

The other (slightly less important) plot twist is that after Brett pleads with Vic to lie to the police and Vic leaves his house he attempts to commit suicide. It doesn’t work, he ends up in the hospital in a coma. And eventually Vic moves on and keeps living his life. This plot twist is actually understandable because Brett is going to prison, he won’t be able to get a good school, job or future and everyone will know he’s a rapist.

I think all the characters are really well written and realistic. It’s easy to see all their ambitions, reasoning and the intentions behind their actions. Another thing I really liked about this book is the detail that Vic memorizes a word from the dictionary almost every night and after he sees an example of a word he lists the definition (not out loud). I think it’s really cool and shows how he thinks.

I really like the ending of this book, because it shows so much character growth for Vic. He used to rely on Brett for almost everything (making decisions, help with homework ,etc.), in the end when he moves on from Brett and keeps going without him, which shows how much the events of the book changed him as a person. Overall I really enjoyed reading this book and I liked how it wasn’t necessarily what you’d expect.