This is an scarily terrifying story of a new fictional justice system, which combines prison and entertainment by letting committed criminals be murdered on live streams watched by millions of people. But when Dee is framed and sent to the famous prison Alcatraz 2.0 she has to try to survive long enough to prove that she’s innocent and try to get off the island. (This is also the first book in a series but I haven’t read the rest of the series yet, so I will post reviews of the other books once I finish them!) 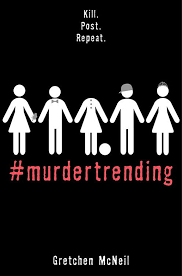 I give this book five stars (out of five). I really, really loved this book! It’s one of the best horror books I’ve ever read and the ending is completely amazing. The main character is a 17 year old girl named Dee, when she’s framed and convicted for her step-sister’s murder she’s subjected to the United Staes corrupt criminal justice system.

This is set in the future and the new system is a terrible one (somehow even worse than the current one) where all murderers are sent off to an island called Alcatraz 2.0 where they have to try to survive for as long as they can when there’s trained serial killers ready to strike at any time. Dee also has an ominous past and people she’s hiding from (she was kidnapped when she was a child and her kidnapper has been looking for her ever since). Dee’s first experience on Alcatraz 2.0 she panickingly realizes she’s dressed as Cinderella, meaning she’s about to be Prince Slycer’s next victim. But he’s murdered hundreds of people with millions of people watching, what difference did it make if his blood was shed instead of hers? Instead of running into the dark maze like his other victims she stayed still and defiant, using the mirror he lets his victims have to her advantage. She nearly blinds him with a bright reflection, knocks him down and smashes the mirror over his head. Making her the first ever occupate to not only survive but kill her supposed killer, and a huge target. And Nyles, the immune guy who walks in as soon as the live feed turns off tells her as much. He shows her around and gets her set up in her new “life” on Alcatraz 2.0.

I’m terribly sorry but that’s all I’m giving you on the plot, there’s so much more going on and that happens but I also can’t go too much further without having to explain everything and spoiling stuff. This book is a total trip, by the end you’ll be questioning everything you thought you knew about the characters and frantically turning pages. It’s incredible and the ending will leave you 100% shocked. Just a warning there’s obviously lots of blood, death and swearing in this book so if that’s a problem for you, you probably shouldn’t read it. Anyway, I really recommend it to anyone brave enough to make it to the end (you will be extremely rewarded, trust me).