Best friends Gracie and Savanna are nothing alike, but somehow they’re still unbelievably close. While Savanna is popular, talkative and wild Gracie is smart, shy and would rather stay home than go out to parties. But things start to change, their friendship turns out to be really imbalanced. When all Gracie can ever do is whatever Savanna wants, are they really friends? In the end is Savanna her best friend or her worst friend? 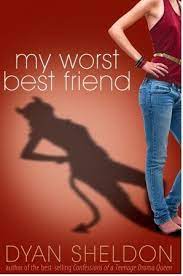 I give this book three stars (out of five). I really liked this book, it’s very relatable and has a great plot and characters. It’s all about Gracie and Savanna’s friendship, how it works and why they fell out and drifted apart. Savanna is a basic popular girl, she’s stupidly pretty, has been with tons of guys and definitely isn’t the smartest. She’s selfish, manipulative and just plain ignorant and unempathetic. But obviously Gracie, who loves old movies and is committed to protecting the environment, doesn’t see this.

From the very beginning you can easily see how Savanna uses Gracie and how Gracie plans her entire life around what Savanna wants. For example, right in the beginning of the book Savanna convinces Gracie to go grocery shopping with her instead of going home and doing her homework (which she then gets a bad mark on). Then that weekend she basically forces her to go to the mall, even though Gracie doesn’t want to and then doesn’t show up at their meeting spot like they planned because she ran into a guy she liked. Then afterwards even though she left Gracie hanging for hours she was mad when Gracie didn’t call her back right away with complete enthusiasm to hear about said guy.

[Slight spoiler warning, skip to the last paragraph to avoid them]

Savanna is a completely horrible friend and a terrible person and reading this from Gracie’s perspective is so cringeworthy and annoying. Because she keeps doing everything she can to please her and when Savanna guilts her into feeling bad, she really thinks she’s the one to blame, especially since Gracie already has anxiety and overthinks a lot. Savanna makes her feel so much worse.

I’m not really going to get into all the details of how they fall apart but as you can probably imagine it’s just Savanna asking too much of Gracie repeatedly and her finally standing up for herself, which doesn’t fly too well with Savanna.

I really, really recommend this book, not only because Savanna reminds me of real friends I’ve had in the past but because I think it’s a great story, especially for young teenagers because it shows and warns you what you should avoid in a friendship. If they act like Savanna does, you should block them out. Reading this from the outside is good because you don’t necessarily have the emotional connection to Savanna and you can see what a jerk she is, even when Gracie can’t. My only disclaimer is that the way Savanna talks will drive you insane (without a doubt) and you will get incredibly mad at her but in my opinion the story is worth it.