In this alternate timeline humans have nine lives, and typically burn through them at a steady pace throughout their life. But while lots of Julian’s friends are obsessed with burning through their lives in fun, extreme and bold ways, he wants to stay on his first life for as along as possible even if it makes him stand out. But when people start disappearing and things don’t add up, Julian must do whatever it takes to find the hidden truth. 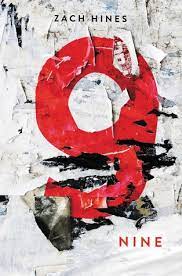 I give this book four stars (out of five). This is a well written book and I loved reading it. Hands down my favourite thing was the main character Julian (and him losing the colour green as a wrinkle or side effect of burning).

The story takes place in an alternate reality, it’s the same year and a very similar timeline but there’s a different history where in 1808 a summer of massive storms left humanity with nine lives each. And to avoid overpopulation and stuff people are encouraged to burn through their lives, after they die they’re reborn in the nearest lake. I’m not entirely sure why and don’t want to explain all the mechanics but, you wake up in the lake and have to swim to the shore, you’re naked cuz “rebirth” and you can’t remember exactly how you died.

So everyone has a tattoo on their necks saying which life they’re on. Julian is a One which would be fine except that he’s a senior in high school and people are expected to go through lives on a normal schedule. He hasn’t because his Mom used to work at the lake and randomly went “crazy” and permadied (permanently died) but before she tried to warn them not to burn lives.

Julian and his best friend Molly go to an expensive private school on scholarships and when they first go there they’re both Ones. Until Molly burns through lives a bit because she didn’t want to stand out. At their school there’s this unofficial club called the Burners where people try to die in the most public, stupid, bold ways possible because they’re going to go through lives no matter what and they have less chance of going retrograde if they do it while they’re young (I’m not explaining all of these concepts you’ll have to read the book for that, sorry).

Molly joins the Burners and burns a few of her lives and obviously Julian kind of supports her but doesn’t participate. Until Nicholas, this jerk who’s the leader of the Burners and the son of the guy who owns all the Lakes, convinces him to join by bargaining information about his mom and how she died if Julian burns a few lives to “inspire” others to join the Burners. So he does, he burns through a couple lives and gets the infomation he needs. With the help of a few wacky friends he made after Molly went missing Julian uncovers a huge conspiracy about the Lakes.

[Major spoiler warning, skip to the last paragraph to avoid]

Julian’s mom worked on a project to eliminate wrinkles and the chance of going retrograde but when the leader of the project changed they discovered a loophole in the Lake’s system and the project’s objective completely changed. Since people can’t remember how they died if they’re killed right after their rebirth then they won’t remember or be aware of it, so people can be killed multiple times and then given the wrong number. After they die once, they’re killed again and again by the nurses until they’re on life Nine but they still think they’re a Three, so the next time they go to die they permadie and don’t come back. This explains how many people went missing after burning with no foreseeable reason.

In the end, Julian and Cody and Nicholas break into the Lake’s headquarters, download and leak the information from the project and set out a “Cease and desist order” virus for Lakes across the country, telling everyone to “Stop Dying right now!”. And Julian is left to make the decision of a lifetime. Does he make the right decision? What are the choices? How does it really end? These are questions that may never be answered if you don’t read the book, come on now you need to know how it ends.

Overall I really enjoyed this book, I think it’s a great read and it’s totally worth it. For example, even my friend who dislikes reading picked this up and thought it was interesting enough to read. The world building is also really well done, I’m already considering what I would do if I had nine lives.