No fixed Address By: Susin Nielsen

In ‘No Fixed Address’ a young boy named Felix and his mother Astrid are forced to learn how to survive in a very bad financial situation and homelessness. Felix has to keep his living arrangement a secret from his friends at school. But as the months stretch on, what was only supposed to be a short term solution becomes more and more permanent. Felix and Astrid live in their van. 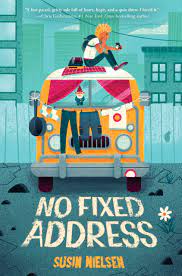 I give this book 3.5 stars (out of five). I liked this book, it’s a cute yet sad story about a young boy and his mom who are going through a tough time financially. It first started in August when Felix and his mom Astrid, ran out of places to stay and so (just for the summer) they stayed in their Westfalia van. And of course living in a van, isn’t the best living conditions for a growing teenager and an adult.

But Astrid has a talent for making her money last, even doing things like stealing and lying to get what they need. In September, they’re still living in the van and Astrid is struggling to find a job. Felix starts at the school (that his mom had to lie to get him into) and on the first day he sees his old best friend Dylan and they almost instantly reunite as best friends again. Felix and Dylan also become friends with this know-it-all girl named Winnie Woo through the school newspaper.

Felix and Astrid are still living in the van, struggling to get by and it becomes harder and harder for Felix to keep it a secret. His mom insists he tells no one and certainly doesn’t let police or social services know, but she’s also depressed and for a while Felix has to take care of himself and her. One day while at Dylan’s house they’re watching Felix’s favourite game show, Who, What, Where, When- a trivia game sort of like Jeopardy. Felix is very good at trivia (even listing the periodic table to fall asleep), and he shouts out the answers before the contestants.

They find out there’s going to be a junior addition of the show that they can audition for by taking a quiz with similar questions online and submitting your results. Dylan, Winnie and Felix all take the test and have the chance to get an audition. A few weeks later both Winnie and Felix found out they got auditions. But Felix’s situation is becoming more and more clear and on the day of the auditions lots of stuff goes wrong. it results in Felix being late and getting into a fight with Winnie. Despite that Felix was the last person standing in the audition and was told he’d get an email and/or call to let him know if he’d be on the show or not. And guess what? He gets on the show!

But when he goes to tell Winnie and Dylan, they know that he doesn’t live where he said he did (he gave a fake address and Dylan went to surprise visit him and found out he didn’t live there). Eventually after briefly running away Felix decides it would be best if he just told them the truth, so after school that day he shows them the Westfalia and understandably they are less than impressed. Winnie insists they have to tell someone and Dylan doesn’t really know what to do since Felix doesn’t want to tell anyone. Astrid happens to come home early that day (she got fired) and interrupts them (basically kicks Winnie and Dylan out).

The next day Felix is able to convince them to not tell anyone at least until after he goes on Who, What, Where, When and for the next few weeks he quizzes himself, studies and prepares in every way he can. The show is in a tournament style so there’s four games with four contestants each and the winner of each game competes in the finale and for the cash prize.

The night before Felix and Astrid get picked up for the hotel where the contestants are staying, two drunk men try to break their way into the van and in a panic, Felix calls 911. The guys run off but Astrid and Felix have to go to the police station.

{Side note: This entire time has been Felix telling the story to someone in the past tense, he was talking to a police officer and telling them the entire story. Which is brilliant and in the beginning they have a section where Felix is talking and the reader doesn’t understand anything he’s saying so he goes back and explains all of it.}

The police try setting up a place for them, hold their things and let them go in time to be picked up and driven to the hotel in a limo. Felix is in the very first round and when the faithful day arrives, he’s extremely nervous. He meets his idol the host Horatio Blast and is answering lots of questions right. And by skill and luck Felix wins. And he goes onto the finale, he’s so close to winning $25,000 and all he has to do is win again. He puts all his focus into the game, practicing all the time and trying not to think about what’ll happen after the show’s over.

And that’s where I’m stopping my plot summary, I don’t want to spoil the entire book or the ending. My favourite part was the ending because it was logical, realistic, sad and also unpredictable. It’s so well written and heartfelt, I really recommend it because despite being a book meant for younger readers it doesn’t have an unrealistic happy ending and it shows the reality of financial struggles. Since even in real life people like this who need help and support are often ignored.