Persey didn’t even want to join the Escape Room Competition in the first place, but she couldn’t turn down the opportunity to win enough money to be independant. But things start going wrong and she quickly realizes that everyone has secrets, even Persey, and one of them is behind it all. Can Persey solve the mystery before she ends up dead? Or will the killer prevail before ever being discovered? 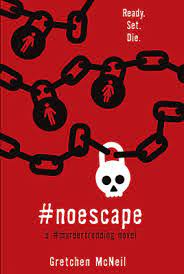 I give this book 4 stars (out of five). I did not expect or realize this was a prequel going into it so I was a bit confused at first but I actually really like the premise and style of this book. Despite being slightly overdone, the premise of a murderous escape room is still scary and interesting. I think the deaths were scary and there was always an element of confusion and chaos that greatly added to the scare factor.

The main character Persey was probably my favourite part of the story. I really liked how we got more of Persey’s backstory throughout the story and how that was specifically related to how she compared to the other people. Her backstory is that she came from a rich family but was treated terribly by her father to the point where she was functionally disowned and she’d been living in her school. There’s also an entire plot line with her brother but I don’t really want to get into it here.

I also quite liked how Persey was constantly underestimated even when she clearly proved to be the best of the group, this made it so much more satisfying when she was proved right later on.

This story follows Persey as she embarks on an Escape Room Competition, where she meets many people all certain that they are the best at escape rooms and will win. But when she gets into the escape room right away things seem to be off, there’s personal connection to each of the participants and challenges that seem to be more life threatening than normal. As they move from room to room the puzzles get more and more intense and people start dying, it’s up to Persey to guide and save the others from the horrible death trap they’ve been left in.

[Spoiler Warning for the big twist and ending, skip the next six paragraphs to avoid them.]

The plot twist at the end was insane, the main character Persey was in on it the entire time. It was her brother who was pretending to be Kevin (one of the members of the group) who set the entire thing up to get revenge on the people who causes their parents’ business to collapse. But Persey didn’t realize that he would actually be trying to kill the other people in the escape room so she’s been actively working to save them.

I don’t even really know what it means for the story and I’m still kind of confused and shocked by it. I think this is one of those twists where the author purposely changes how the story is written so the twist can be more surprising, because if it were not for the twist Persey’s inner monologue and thinking would’ve been totally different because she knew what was going on that entire time.

I know that her fear and panic were real because she never expected anything like what happened, but she would’ve been in a completely different realm of thinking. I think it’s kind of ingenuine to present Persey one way throughout the entire book only to flip that on its head in the last few chapters, it doesn’t make sense because everything we’ve read from her perspective didn’t give that away even when going into her backstory. So I don’t like how the twist sort of messed up what the rest of the book had established for Persey’s character. But at least in the escape room she was actually trying to save the others and that part wasn’t fake.

But the twist does make some sense because there had been multiple instances of Persey thinking Kevin’s demeanor was switching unrealistically to protect her, and I actually thought he was the bad guy from pretty early on. But it also makes sense because it explains how she and Kevin ended up together in the competition because that was planned and they didn’t just let some random person into the competition.

The name revealed on the last page is what really confused me. How could Persey and Kevin really be Kimmi and Abe/Coop when in this book he seemed to be the violent one while she was normal and it’s the opposite in all the other books? I’m still kind of confused to be honest, Kimmi is the one who kidnapped Dee in the first book and later became the Postman after her father died. But Coop was the one who helped the main characters in #MurderFunding, so it doesn’t make sense for their roles to be reversed here.

Honestly I think I’m just missing something but I don’t want to get too deep. This gave background to Persey and Kevin who were revealed to really be major characters but now I’m confused on how this information fits into the rest of the series.

In regards to the background characters I think Riot as a character name is very badass and fun, even if the actual character didn’t stand out. And having one of the characters Neela just NOT swear the entire time even when in extremely intense life or death situations was really cool and it was so funny to see all the crazy things she said instead of actual swear words.

Also some of the characters in the escape room were blatantly crazy, like why were some of the girls fighting over a guy’s attention when people were dying and also the fact that no one believed Persey when she knew something was wrong is so infuriating.

I didn’t have this point when I initially wrote out my notes for this review, but within a few weeks of reading this I actually had nightmares that were pretty similar to the premise. I’m not sure exactly why this particular book got to my subconscious, because even the other books in the series were totally fine for me but I wanted to include that note just in case that’s something you might experience as well.

I really liked this book and the series overall, my favourite book would probably be #MurderFunding mainly because of the main characters Becca and Stef since I loved seeing them together. But for this one the final twist got in the way of me fully loving this story because it confused me and my outlook on many of the characters and events that take place in this series.