Not My Problem By: Ciara Smyth

Aideen’s life is a mess. Her mom’s drinking habits are getting worse, she’s failing all her classes and her only friend Holly is turning into someone she doesn’t recognize. But everything changes when she decides to solve other people’s problems instead of her own. 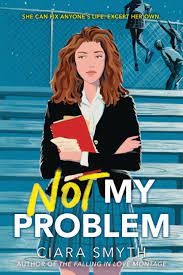 Aideen’s life is a mess. Her mom’s drinking habits are getting worse, she’s failing all her classes and her only friend Holly is turning into someone she doesn’t recognize. But everything starts to change when a chance meeting leads her right into Meabh Kowalsha having a mental breakdown, panicking and trying to calm Meabh down she blurted that she could fix her problems. Meabh is a perfectionist, the type person who needed to As in all classes and be the captain of a sports team and be Student Council President. She was so stressed because of how much stuff she was forced to do, her schedule had everything in it nearly down to bathroom breaks.

Aideen jokingly offered to break her ankle, that way she couldn’t play sports, work out or do yoga. It freed up lots of her time and would give her a break, so Meabh was actually sold and really wanted Aideen to push her down the stairs and eventually she agreed. Afterwards they were both startled by a boy named Kavi who overheard everything and he started Aideen, a kind of business or social enterprise of doing favours for people, but the catch is that afterwards they owe her a favour or help in return.

This spread around the school a bit and Aideen started helping out other students with various problems, often calling in Meabh, Kavi and other people who she’d helped before to help with the current problem. Eventually this group of people gets bigger and Aideen finds herself with more problems than she started out with, a scandalous Student Council election to try and sway and new friends who’ll support her through everything.

[Spoiler Warning, there are spoilers throughout the rest of this review. Skip to the last paragraph or stop reading now to avoid them.]

I really liked the main character Aideen and her personality. She had the perfect sense of humour for me and she had this constant sense of not caring about anything and it was strongly reflected in her actions. I liked the way she approached things and I loved her sarcasm. I also really loved her development throughout the story, she comes to terms with potentially losing her closest friend, she finally lets new people in and tells them the truth about what she was dealing with and on top of that she reaches out for help from someone who’s been there since the beginning.

By the end of the story she was ready to face her own issues too and she had more people by her side to support her as she does. I think the message of Aideen finding the courage and learning how to start solving her own problems by helping other people with theirs. You can see how it gives her unique perspectives and helps her see that everyone has things they’re struggling with, even perfectionists.

I was a bit confused by some of the language, slang, and schooling things discussed in this book. I believe this takes place in Ireland, but I’m from North America and I honestly don’t know that much about Europe so I could be wrong there. This contributes to lots of the things in this story that are different from what I’m used to, so it took me a little longer to follow certain points. I’m mainly mentioning this in case there was something that I could’ve missed on account of just not fully knowing what was going on.

There was also lots of representation for LGBTQ+ people, the main romantic subplot was between Aideen and Meabh and there were also other background characters in queer relationships. I don’t remember any non-cisgender characters, but we will take what we can get.

I know that not long ago just a small amount of representation in movies or books was a big deal. But now that that is basically expected for diversity, I try to make a point of expecting the same things for gender identity, because it’s kind of hypocritical of me to be praising something for its diversity if it doesn’t have any diverse gender identity or expression.

I really liked the romance between Aideen and Meabh. I think it worked really well because they’re such different characters and in a way that’s what brought them together. I think having Holly and Meabh hate each other also added an extra layer to their dynamic because sometimes Aideen felt like she was betraying her best friend by liking her. Overall I really liked them together and I think the pacing of their relationship and them getting together was very well done.

I really liked this story, despite containing major conflicts  and serious topics I thought it was wholesome. Seeing all these high schoolers coming together through a totally random occurrence, becoming really close and helping each other out, is really cute. I liked all the characters, they were all unique and had a wide variety of problems they needed help with and Aideen was always able to come up with the most comically brilliant ideas. By the end seeing the ragtag group of kids that all worked together to campaign for Meabh or get Dylan to be popular was very fun and entertaining.

I really liked Kavi and the other friends Aideen makes, he is very dedicated to her and Meabh and he’s also interesting. He appears randomly, he talks a lot and goes out of his way to be nice to people. He also represents a racial minority and is aware of how that affects him socially, but he also tries not to make assumptions about others because he wouldn’t want them to do that to him.

I think that the main conflict between the other characters and Aideen was sometimes fueled by overreactions. Her friendship with Holly didn’t seem to be balanced because Holly was Aideen’s only close friend but Holly had many other friends and didn’t have a problem blowing Aideen off to hang out with Jill. So Holly getting super pissed after Aideen canceled lunch once was kind of annoying and obviously hypocritical.

The entire election between Holly and Meabh was completely fueled by pettiness and it worked out in the end because Meabh realized she didn’t really want to be Student Council President, but Holly only won because she felt personally attacked by Meabh’s practical policy. So she threw herself into the election just to prove she was more liked than Meabh, then she posted a video that got Meabh cyber bullied and judged by nearly everyone at the school and still wanted to publish an article that would entirely ruin Meabh’s reputation and livelihood.

Holly hated Meabh and just because it was mutual doesn’t mean it was justified. Holly went out of her way to do everything she could to tear Meabh down and when she was confronted she acted apologetic but didn’t do anything and she never even apologized.

I think Holly’s friendship with Aideen had many flaws and even in the beginning there were signs that it wasn’t entirely healthy. I don’t like Holly and I think she was really mean to everyone, not just Meabh.

I think there is an interesting statement here about having to hate someone because your best friend hates them and while this can be generally true since lots of the time you’ll have the same opinions, beliefs and mutual friends, this doesn’t mean that if your best friend dislikes someone you have to too. No matter the circumstances you are your own person and you get to make your own decisions and it can have nothing to do with your best friend, even if you know they have different opinions.

The time where I think the conflict was a bit exaggerated was when Aideen disappeared for a week and both Meabh and Kavi were super mad at her for not being there when they needed her. Personally I don’t think Aideen was in the wrong as much as they made her out to be, because she didn’t just randomly decide to leave, she was trying to stop her alcoholic mom from drinking and she didn’t have the energy to communicate with anyone. I think most introverts would relate to not wanting to respond to texts and calls and when in her type of situation she might’ve felt ashamed to be talking to people, especially because at this point she was still far from comfortable opening up to them.

I think Kavi and Meabh were both right that as a friend she should’ve been there for them when they were dealing with a hard time, but that goes both ways. You could say that since Aideen wouldn’t tell them what was wrong and wasn’t responding when they reached out over text, they did everything they could and had a right to be mad. But I would argue that in a perfect friendship they would’ve at least asked her why she was gone instead of immediately getting mad at her.

Personally I also think that having a parent with an addiction is worse than coping with bullying for a while. That’s not to directly compare their different problems, it’s just that Meabh acted so offended when Aideen was away but it’s not like she knew something was wrong and didn’t do anything; she just isolated herself for a week. If they asked her why and actually talked it out instead of just getting mad then a lot of the conflict between them could’ve been avoided. It just frustrates me because Aideen is already dealing with a lot and then her friends turned on her for being a bad friend on top of everything when she was just focusing on her own problems for once.

Overall I did really enjoy this book but some of the conflict and fighting between characters frustrated me since the other characters didn’t know what Aideen was dealing with, so some of their actions and assumptions come off differently to the reader who sees everything from Aideen’s point of view.