Out of the Blue By: Sophie Cameron

‘Out of the Blue’ is a story of a timeline in which magical Angel-like Beings just start falling out of the sky one day. After humans figured out it wasn’t necessarily the end of the world, they capitalized on it (as they always do). But what will Jaya do when a Being happens to land very closer her and is the first one to ever survive falling. 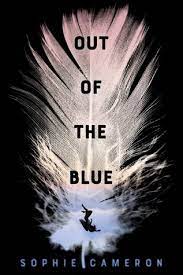 I give this book 4 stars (out of five). I really liked this book, it has a really unique and creative plot, with very well written and real characters. The main character, Jaya is a teenager dealing with both the disappearance of her (kind of) girlfriend and the death of her mom. Just a few months after her mom’s tragic death, a Being falls from the sky.

An non-human angel-like figure falls from the sky (dead) and the world goes into a panic. People freak out and it’s basically treated like the end of the world. But after a few weeks when nothing happens, life kind of goes on, until the second Being falls. That’s when it’s stopped being treated as a potential hoax, and after the twentieth or thirtieth fall, it almost becomes part of the normal everyday life.

In fact, lots of people still regard it as a sign of the end or whatever, lots of people capitalize on it. Tons of Being themed restaurants, stores and similar things pop up all over the world, places where Beings fell become tourist attractions. It’s almost just another part of human culture except for the mystery of where they come from and who they are.

Jaya’s dad is completely obsessed with the Beings and as a result her younger sister Rani is also almost an encyclopedia of Being facts and information. The Beings are given numbers with the number of which they fell (1 for the first, etc) to identify them and Rani can list facts about all of them by memory. Jaya’s dad thinks he can predict and catch where a Being will fall, something no one has ever been able to do. The Beings have taken over his entire life, he quit his job and basically stopped parenting, all his time and energy is spent on the Beings.

For the summer, he drags Jaya and Rani to Edinburgh because he’s convinced that’s where the next Being will fall. Rani happily goes along but Jaya really doesn’t want to, she kind of resents him for becoming so obsessed and not being there for her when she needed him without her mom. In Edinburgh, after a heated argument with her dad, Jaya finally tells him what she thinks about his project and storms off into the night without even really knowing where she’s going. And magically, she ends up in the right place and the right time to witness a Being fall (or well have a Being fall basically right on top of her) and for the first time survive.

That’s all I’m gonna say for a plot summary because everything that happens next is too much of a spoiler but I love the story, especially the ending although it is sad. I think this book is great and I really recommend you read it.